A few important notes before we dive into the content on this disc. This new series features a crude animation style, somewhat reminiscent of Nickelodeon’s Ren & Stimpy, and the characters are more rascally than you’re used to seeing them, harkening back to Mickey’s earliest black and white shorts. The character designs are based on the earliest color versions, where faces were white and eyes were pie-shaped. While the series occasionally resorts to cheap potty jokes, the majority of the content is all in good fun and frequently references Walt-era material.

The content begins with the newest TV special, which aired on September 28th, called The Scariest Story Ever: A Mickey Mouse Halloween Spooktacular! During the beginning credits alone, there are tons of Disney references to Night on Bald Mountain, Ichabod & Mr. Toad, and the Donald Duck short Trick-or-Treat. After a night of trick-or-treating, Mickey, Donald, and Goofy tell the nephews (Huey, Dewey, Louie, Morty, and Ferdie) some stories that the kids don’t find so scary. After failing with variations on Frankenstein and Van Helsing, they find that the boys sugar rush is subdued with Hansel & Gretel. Be on the lookout for a surprising nod to Xanadu during the Frankenstein segment.

Jumping forward to December, we find another holiday special in Deck the Halls: A Mickey Mouse Christmas Special. Dreaming of a white Christmas, Donald decides to stay home instead of heading south like the rest of the ducks (Daisy, Scrooge, Ludwig Von Drake, Huey, Dewey, Louie, and Gus Goose). The poor Duck tries to get into the Christmas spirit, but goes crazy in the winter weather and his friends will have to help him survive. Look for references to the Victoria & Albert restaurant at the Grand Floridian, a dancing ornament window display at Disney’s Hollywood Studios, a nod to Once Upon a Wintertime and the short Donald’s Snow Fight.

Five bonus shorts are available as bonus features, all of which fit into the “Scary” theme of the title.

Mickey Mouse: Merry & Scary comes in a standard DVD case that fits inside an embossed slipcover. Inserts include a code for 75 Disney Movie Rewards points and a flier for Disney Movie Club.

This DVD uses Disney’s FastPlay service, which opens with ads for the Walt Disney Legacy Collection and Pixar’s Coco before playing the features and bonus shorts. Afterwards, it plays ads for Disney Movie Rewards and Disneynature Dolphins. The menu features images from the two holiday shorts split between a purple and red ribbon with music from both shorts.

The new Mickey Mouse shorts have grown on me over the years. Mickey Mouse: Merry & Scary offers two hilarious holiday TV specials and some worthwhile bonus shorts so families can watch them perennially. Best of all, the specials are peppered with nods to Walt-era Disney films. 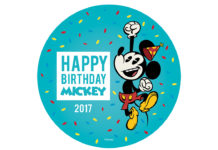