The Haunted Mansion's librarian, Amicus Arcane, is back for the second installment of Tales from the Haunted Mansion. For those unfamiliar, this book series is aimed at ages eight to twelve and promised that each volume would reveal the backstory for some of the "999 happy haunts," but the first installment completely missed its mark. I approached Volume II: Midnight at Madam Leota's with a great deal of caution, and for good reason.

From the title, you would assume this is one complete story about Madam Leota. I wish that were the case, but like the previous installment this book tells four short stories, none of which reveal any backstory about her, and the infamous beheaded medium appears for a total of nine pages. However, the second book in the series has more to do with the famous Disney Parks attraction than the first one and is inching a tiny bit closer to what fans of the ride deserve.

Rather than four teenagers winding up in the mansion, the connecting tissue for Volume II follows William Gains, a young adult who can't get over the death of his sister and has been seeking a true medium to connect him to his loved one on the other side. His search brings him to the name "Madam Leota," which naturally leads him to The Haunted Mansion where Librarian Amicus Arcane teases him with four chilling stories.

In "Please Remain Seated," two best friends find some real horrors at a carnival that features a cheap knock-off version of The Haunted Mansion. "Blood Relatives" is about a boy who has an old relative who lives in a coffin in the attic... because he's a vampire. This one is explained away as being the vampire in the moving-eye portrait from the attraction. In "Uncle Rory's Late Show," a boy is willed a storage unit full of film reels and encounters the ghost of a former Hollywood star. Lastly, "The Roaches" tells the sad story of how a mute orphan girl living at a bed & breakfast came to her early end by being eaten alive by cockroaches.

Once again, Tales from the Haunted Mansion is neither the tie-in book fans asked for nor the one they deserve. However, it inches closer to what it should be in this second installment. Unlike the first book, Amicus takes William through more of the mansion and he comes in contact with a few iconic characters, including Constance the Ghost Bride and the Hatbox Ghost. However, wouldn't these volumes be better if each focused on a character from the ride and gave them a legit backstory? Why are fans being sold short by this truncated Goosebumps rip-off or poor man's written version of The Twilight Zone? Thus far, the series has done more harm than good.

Ghost Writer John Esposito has once again interjected Amicus Arcane's un-witty commentary into the narrative, where he is rude, condescending, and wishes death upon the readers multiple times (did I mention the target age of 8-12 yet?). This also proves a fundamental misunderstanding of the appeal and allure of The Haunted Mansion. At Disneyland, your invitation to the afterlife is optional ("Any volunteers?") and the ghosts offer a lighthearted and oftentimes comical view of the other side. Tales from the Haunted Mansion, on the other hand, tries and fails to scare and is consistently grim and dire, never humorous or whimsical.

One of the most famous characters from the attraction, Madam Leota, is completely wasted in this sequel. To add salt to the wounds of Volume I, this volume references it several times and even finds a place for "The Fearsome Foursome" in the attraction (the four modern teenagers allegedly resemble figures from all over world history in the afterlife in this afterthought attempt to make the first book relevant). It's sad when the unofficial fan fiction on the internet is 100 times better than this series published directly by Disney Press.

Assuming that Volume III is in the works, I'm on my knees begging that this series be steered back on course. What fans really want is for each volume to provide a well thought-out backstory for each of the highlighted spirits. Ditch the incongruous short stories concept, relegate Amicus Arcane to a mere introduction/epilogue, and stop using a lost wanderer stumbling upon the mansion as a construct to tell these stories. The premise is these books are from the library of The Haunted Mansion, we need no other explanation. And I can say without hesitation that Tales from the Haunted Mansion Volume II: Midnight at Madam Leota's doesn't deserve a spot on the shelf in that prestigious library. 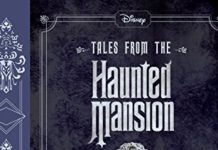