A few years ago, I discovered through social media that the Disney Channel Original Movie Halloweentown wasn't filmed on some picturesque backlot in Hollywood, but in a real town in Oregon. If that were the end of the story and the residents went about their business as if it wasn't a big deal, that would be one thing. But the town of Saint Helens isn't just a passive town where a beloved DCOM happened to be filmed. Nay, they embrace it wholeheartedly and make it an annual event called "The Spirit of Halloweentown" every October.

When the cast announced that they would be reuniting in St. Helens on Saturday, October 14th, for a day full of Halloweentown fun, I was already desperate to go. But when actress Kimberly J. Brown revealed that they would be dedicating the Town Square Pumpkin (yes, THE pumpkin from the film!) to the memory of Debbie Reynolds, there was no force of nature that was going to keep me away. I waited for the midnight bus, snuck aboard, and soon found myself in Halloweentown for real! Being a diehard Disney fan, I was delighted when almost instantly, I spotted a trio dressed as the Sanderson Sisters from my very favorite Halloween film of all time, Hocus Pocus. By the end of the day, I had seen at least three sets of sistaaahs and a few flying solo as well. Performances were held throughout the day on the steps of City Hall and one of them was a troupe dressed as these chicks lip synching to "I Put a Spell on You" (with lead-in dialogue ripped from Magic Kingdom's Hocus Pocus Villain Spectacular). But I've gone a little off topic, forgive me.

Things to see in St. Helens include the town square, with picturesque City Hall as an aluring backdrop. In addition to the pumpkin from the film, the square is also home to a larger metal pumpkin plus fun photo ops like a broom graveyard and a tribute to The Nightmare Before Christmas. But better still is Benny's cab, which was parked for photos with a skeleton in the driver's seat!

Other locations in the heart of town include the dentist (now an Insurance agency), Wolfie's salon, and the movie theater where Kalibar made a frightening appearance. The theater is particularly interesting as Debbie Reynolds chose this location to rehearse her scenes while off camera. It has been lovingly restored and a behind-the-scenes photo of Debbie can also be seen in the concession area where movie snacks are incredibly inexpensive. If you're in St. Helens, you must visit the Columbia Theater. The event's organizers were passing around maps to help you explore other locations within walking distance of the heart of town. Through this map, I discovered that the Twilight films also filmed in St. Helens, where fans can find Balla's home and a few other locations from those films. But they're not Disney or anywhere near as good as Halloweentown (sorry, not sorry). I was more concerned with visiting Grandma Aggie's house, which is actually a bed and breakfast called Nob Hill River View. It was sadly booked solid for the weekend, but for any fans booking a trip - how cool would it be to stay here? Kimberly J. Brown, who played Marnie in the first three films, was joined by her on screen mother, Judith Hoag, and her siblings from the film Joey Zimmerman and Emily Roeske. They spent almost the entire day meeting fans and the lines were tremendous. They could not have been kinder or more gracious to their fans, delighting in their stories about how these films impacted their lives. As night fell, the moment of honor and remembrance drew near. The full ceremony was posted to the Spirit of Halloweentown's official Facebook page where you can watch the cast share their memories of working with Debbie Reynolds.

The pumpkin was gorgeous at night after the lighting ceremony and the plaque is a loving tribute to the legendary Debbie Reynolds, who left an impact on a world of moviegoers, the town of Saint Helens, and the lucky thespians who had the pleasure of joining her on a magical trip to Halloweentown nineteen years ago. 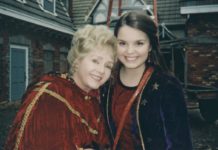 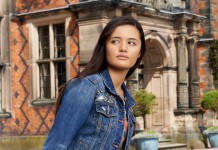