Bruce the grumpy bear is back in Bruce's Big Move by Ryan T. Higgins. In his first book, Bruce became Mother Bruce when four geese decided he should be their mother. In the sequel, a trio of mice snuck in and turned his home into Hotel Bruce while he was away, which made him very upset. The mice also received their own spin-off last spring called Be Quiet!

Bruce is tired of sharing cramped quarters with his four geese and the three unwanted mice. So when the mice decide to go outside to play, Bruce packs up his flock and moves to a lakeside cabin for some peace and quiet. There, he discovers a host of new neighbors who are guaranteed to annoy him. But when the move upsets his kids, he discovers their happiness isn't the same without their mice friends. It seems that once again, Bruce just can't win. In the end, he proves the be the best mom ever.

Higgins crafts yet another funny and charming story for kids and parents alike. His illustrations alone can bring fits of laughter and the ending in particular will leave parents in stitches. The enduring success of the Bruce series has been the fact that these stories aren't just fun for kids, but for parents as well.

The illustrations continue to delight and I love the details that Ryan T. Higgins puts into his pages. Parents will revel in a double-page spread of the geese's messy room, which features many nostalgic pastimes. There's also a page where grumpy Bruce "smiles" which is particularly fun. And this hardcover book reveals alternate artwork beneath the dust jacket that also reveals a funny gag when looking at the front and back.

Like the previous Bruce books, Bruce's Big Move is sure to become a favorite of kids and parents alike. It's a perfect addition to your storytime routine and it highlights the theme of home being where the heart is. Bruce's biggest fans won't want to miss this third adventure! 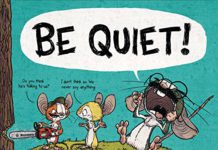 Children’s Book Review: Be Quiet! (From the world of Mother Bruce) 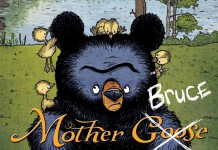