Just over 80 years ago (October 17th, 1937), a triplet of ducks, described as "angel nephews" debuted in a Sunday morning Donald Duck comic strip. Huey, Dewey, and Louie were sent to stay and terrorize their Uncle Donald till their father was out of the hospital after a firecracker "accident." These three ducks would go on to be some of the most popular Disney characters staring in countless cartoons, comics, along with a few video games, and animated features. 30 years ago, as part of the Disney Afternoon lineup of cartoons, Huey, Dewey, and Louie joined with their Uncle Scrooge and a cast of unforgettable characters in DuckTales. This beloved show ran for 4 seasons with 100 episodes and a feature-length film, DuckTales the Movie: Treasure of the Lost Lamp. Now we jump forward to present day where not only has DuckTales returned with a whole new series of animated shows on DisneyXD but also a brand new comic from IDW Publishing.

This ongoing monthly comic captures the tone and feel of the new animated series perfectly. With two stories this issue they give a great feel for the characters, which unfortunately are only Donald and the nephews this issue. The first of two short stories, both written by Joe Caramagna, is a fun tale of Donald taking over as keeper for a lighthouse in the middle of the desert. Huey, Dewey, and Louie, once they find out there is no water, are told by their uncle to stay in their room...and we all know how that ends.

The second story "The Great Experiment of the Washing Machine" really draws out the personalities of the boys and highlights Donald and his temper as Huey, Dewey, and Louie explore the Bombastic Band of Brains laboratory each looking for an experiment that reflects who they are. This story really is more of a true episode of DuckTales in print form as the action and comedy are put out to the readers perfectly. But as with the first one, it is just ten pages which really left me wanting more.

DuckTales #1 is a perfect introduction to comic books for any fan of the animated series. The style and coloring of this book is a direct lift from the new show which will work well, even for us old school fans. My only complaint is the layout of the book with HUGE top and bottom margins the actual comic panels seem very small, which in turn makes the print hard to read — it almost looks like it was misprinted.

I will follow this series for as long as it runs because it really does have the feel of the animated series and you can never go wrong with more DuckTales (woo hoo).

To wrap up if you are any type of Disney fan this is a great comic to add to your collection or a perfect way to start! Even though issue 1 came out a few weeks ago, you can still head to your local comic shop and find it before issue 2 hits the stands or just head to the IDW Publishing site and order it. 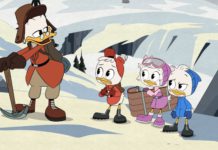 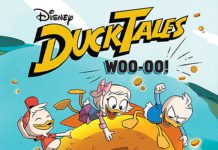 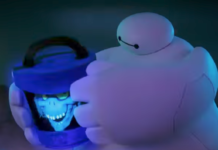