Last month, a film that is dear to my heart celebrated its 20th anniversary with little fanfare and I’d like to change that. On November 2nd, 1997, twelve-year-old Alex settled down in his pajamas for what he knew would be a night to remember. It was the premiere of a new film on The Wonderful World of Disney, Disney’s Rodgers & Hammerstein’s Cinderella. But this was more than just a retelling of a TV musical I was already very familiar with.

From the opening shot where gold magic swirls reveal Whitney Houston as the Fairy Godmother in front of a vivid blue background with new prologue lyrics to “Impossible,” I was hooked. This bright, bold, splashy, campy musical starred actors I already loved (WHOOPI GOLDBERG!!!... and Jason Alexander of Dunstin Checks In fame) and introduced me to new ones (BRENADETTE PETERS!!!!... and Victor Garber, Natalie Desselle Reid, and Veanne Cox). And I developed a mammoth crush on Paolo Montalban as Prince Christopher, who I’ve never seen in anything since and it’s an insult to his talent that this film didn’t launch a career as a leading Hollywood heartthrob. In the early 1990’s, Disney Channel repeatedly aired the 1965 version with Leslie Ann Warren and I loved it. I was already familiar and obsessed with classic songs like “In My Own Little Corner,” “The Prince is Giving a Ball,” “Impossible,” “Ten Minutes Ago,” and “A Lovely Night.” I have since become a fan of all of the shows written by Richard Rogers and Oscar Hammerstein II, but it was these songs that started it all for me. And I had never heard them done as well as they are here, sprinkled with 1990’s pop elements while still retaining a musical theater quality.

But this didn’t simply repeat the songs from the original production. It actually expanded the score with some lesser-known Rodgers & Hammerstein songs from less successful musicals. After the overture, the film starts with “The Sweetest Sounds” sung by Cinderella and Prince Christopher from a show called No Strings. You don’t cast someone like Bernadette Peters without giving her a song of her own and she belts “Falling in Love with Love” like she’ll never sing anything as pure ever again, a song originally from the show The Boys from Syracuse. Whitney Houston needed a song she could belt and to me, her version of “There is Music in You” (written for Main Street to Broadway) is synonymous with the late great singer. When she passed away in 2012, the image of her floating above the wedding singing this song is all I could think about and I like to think she’s singing over all of us from heaven during our proudest moments. Whitney Houston’s version of the Fairy Godmother is approached more like a guardian spirit in the film, floating past the carriage on Cinderella’s way to the ball, disappearing in a cloud of pixie dust and reappearing just as quickly. She's magical, etherial, and eternal. Speaking of Whitney Houston, this production wouldn’t have happened without her. Not only does she have an Executive Producer credit, but she was originally intended to play the lead role. At thirty-three, she doubted that she would be able to sell the part and instead cast her protégé, Brandy Norwood, who had recently become an actress with her sitcom Moesha. This was Whitney’s first time as a film producer and in partnership with her friend Debra Martin Chase, whom she met on the set of The Preacher’s Wife, she went on to produce The Princess Diaries and its sequel, plus Disney Channel’s The Cheetah Girls film series. As an adult nearing the same age Whitney was when she made this film, I can say that I feel extremely unaccomplished now that I know how young she was when she made this.

As obsessed as I was initially with the film, I heard nothing but criticism from my peers and throughout the next two decades, people would tell me that I’m wrong and this version is awful. Most of them would cite the color-blind casting as the main reason they couldn’t stomach the film and I never understood their objection. In the making-of featurette on the DVD release, Whitney Houston refers to it as “A rainbow cast of people.” Whoopi Golberg is African American, Victor Garber is Caucasian, and Paolo Montalban plays their son and is of Filipino decent. It makes a powerful statement and sure, it contradicts the science of genetics, but it offers equal representation in a fairytale musical. Given everything that has come to light in the recent social movement about racial prejudice, I would argue that nothing could do more good for the world than a film like this where kids are exposed to every color of person not only living in harmony, but joining together as a family. The main protagonists are also people of color, which is rare for any film. In the twenty years since, I can’t think of another example of this kind of color-blind casting in film or television. It’s fairly common in theater, but that’s less accessible to kids. One of the greatest crimes of the 20th century is the fact that this production never received an official soundtrack release. You can scour the internet and you will only find audio ripped directly from the film, with dialogue and other sound effects included. After the passing of Whitney Houston, I had high hopes that it would renew interest for collectors of her work, but Disney has yet to respond with a release. Intrada, I hope you’re reading this, please make it happen.

Chris Montan, who primarily works on Disney animated films, produced the memorable renditions of these Rodgers & Hammerstein classics. His other credits include films like Hercules, Enchanted, and Frozen. Rob Marshall provided the fantastic choreography, giving every viewer ballroom goals, and he later directed Disney’s TV remake of Annie, plus Into the Woods and the upcoming Mary Poppins Returns. He is also being considered to direct the upcoming live action version of The Little Mermaid, but this project predates his directorial debut.

The film’s visual style is unique and specific, which extends to all of the sets and costumes. Blue, purple, pink, and gold become the most common colors and swirly patterns can be found in almost all design elements, including the Fairy Godmother’s gorgeous wig. It visually sets itself apart from anything that came before it, but I see productions attempting to copy or pay homage to it often. You can look at any still frame from the film and know without a doubt that it’s from Disney’s Rodgers & Hammerstein’s Cinderella, which, but the way, is a mouthful and everyone actually just refers to it as Whitney Houston’s Cinderella, which is accurate. This was ABC’s first Wonderful World of Disney musical, which became a staple for ABC for several years. Films that followed in its wake include Annie (1999), Geppetto (2000), South Pacific (2001), The Music Man (2003), and Once Upon a Mattress (2005). Now that live musical events are a tradition for other networks, namely NBC and Fox, it kills me that ABC hasn’t revived this tradition, but I haven’t lost hope.

Rodgers & Hammerstein’s Cinderella was written for television in 1957 and Julie Andrews starred in the title role in the original production. How fitting that she would later co-star in The Princess Diaries produced by Whitney Houston, who’s debut producing effort was this very film. Another Princess Diaries connection can be found in the backlot used to create this fairytale village, which is Universal Studios’ Little Europe. It became Genovia in The Princess Diaries 2: Royal Engagement during the “Breakaway” parade scene, and is currently on TV weekly in NBC’s The Good Place. Touring stage productions of the show first began in 1958, but the Disney version inspired a tour in 2001 that found Paolo Montalban reprising his role as Prince Christopher and featured Ertha Kitt as the Fairy Godmother with Debbie Gibson in the title role. It retained both “The Sweetest Sounds” and “There’s Music in You” as the show’s bookend numbers. Disney Legend Lea Salonga headlined an Asian tour in 2008, which also kept both songs intact and produced a cast recording. While it's no substitute for the arrangements from this film, it'll do in a pinch.

In 2013, the show finally made it to Broadway for the first time with a new production. While it did lose most of the additions to the Disney TV version, it kept “There’s Music in You” (and a reprise at the end), plus it continued the tradition of expanding the score with lesser-known Rodgers & Hammerstein songs originally written for other shows. I experienced this production in 2014 when pop star Carly Rae Jepsen starred as Cinderella with Fran Drescher as the Stepmother. Later that year, they were replaced by Keke Palmer and Sherri Shepherd and this was considered a bold move for traditionally pale roles. However, I thought it was a natural progression following this film and wish I could have made it back to NYC to see it again. Those interested in experiencing this production should note that it is still on tour across America, although it currently features Caucasian leads (that could change). Twenty years later, the only element that doesn’t hold up is the visual effects, which look like a Geocities website in comparison to what can be done with computer graphics today. I would love to see Disney give the film a little love, such as an HD transfer and soundtrack release. They must not realize how many fans the film has, or how monumental and important it was and still is. It took them about twenty-five years to start giving Hocus Pocus the respect it deserves, so hopefully if we’re vocal enough, we can celebrate the 25th anniversary of Whitney Houston’s Cinderella in style (AKA Disney’s Rodgers & Hammerstein’s Cinderella). 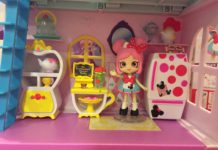