Since Disney Springs was announced, for me the biggest question was what would take the spot of my beloved Adventurers Club. Then, when The Edison was announced, I was intrigued after hearing of the original location in Los Angeles. The prospect of this new style "steampunk" type location sounded like it could be a fun place to hang my hat for a meal or two. As the construction carried on into the former location of the B.E.T. Soundstage next door, rumors began to spread about what would take up such a large space. Well, I was lucky enough to get a tour of almost the whole complex and I have to say it is amazing looking and the food sounds amazing! First lets start, as all good Disney locations do, with a bit of a backstory.  Lake Buena Vista was home to the beautiful Trans-Global Airways Air Terminal, with a beautiful art-deco air terminal welcoming travelers from all over the world. The terminal was home to a small bakery run by two Italian immigrants, Maria & Enzo. But as the terminal fell on hard times and closed its doors to air travel, the couple decided to purchase the entire building and converted it into an upscale dining location.

Pizza Ponte, the small bakery that started it all, is now the grab and go spot for some of the best of Maria and Enzo's quick bites. Serving pastries, pizza, Italian sandwiches, and espresso. Pastry specialties include Bomboloni (Italian doughnuts) Sfoglia di Riso (pastry with rice cream) and Tiramisu. Savory items include signature Triangolo (stuffed pizza bread) sandwiches, Porchetta (roast pork) and Pizza al Taglio, Sicilian-style pizza by the slice it will be hard to visit Disney Springs without stopping by this location. Taking over the terminal itself is Maria & Enzo's Ristorante. This beautiful Art Deco dream location with a 50-foot ceiling and a beautiful view of Lake Buena Vista will quickly become a must do for all Disney Springs guests. The term "casual elegance" was used to describe this dinning experience, with no dress code guest would not feel out of place after a day in the parks or a dressy night out. As with current air terminals, there is a first class lounge and Maria & Enzo's Ristorante. The First Class Lounge is a smaller private dining area, perfect for private events. Additionally, guests will be randomly selected for an "upgrade" and adults given a complimentary glass of Prosecco while the younger guests will be awarded flight wings. The icing on top of the cake that is Maria & Enzo's Ristorante has to be the globe hanging high above with a gold pin, making each of the Disney Parks and one special one marking Walt's hometown of Marceline, Missouri. Surrounding the ceiling is a geographically accurate mural, meaning if you are sitting in the dining room and you look up and see New York represented you are actually looking toward New York. Unbeknownst to Maria & Enzo when they purchased the terminal was the remnants of a bygone prohibition era speakeasy. This tunnel was used by the works of the nearby power plant, now The Edison, for rum running and left undisturbed until Enzo found the entrance and decided to create his own little hideaway. While the backstory of this location is great, as a true Pleasure Island fan, the actual story of what this area was intrigued me even more; the Hideaway was for many, many years the 'green room' for the actors of the Adventurers Club and Comedy Warehouse. This highly themed location will not only have Prohibition-era cocktails at its Tunnel Bar but will serve a casual menu of hearty Roman dishes, such as the city’s legendary Bucatini alla Carbonara (hollow spaghetti with creamy egg and pancetta sauce) and Tonnarelli Cacio e Pepe (square-cut spaghetti with pecorino and black pepper). The Hideaway will also be home to a 'Sunday Supper' where guests will be able to bring their own bottle of wine, be it a fine Chianti brought over from the old country or some Two Buck Chuck from Trader Joe's, with no corkage fee. One of the most interesting points of Enzo's Hideaway Tunnel Bar is the large graffiti wall, wherein the Ristorante above the mural is elegant and done with great care. This is a collection of "stories" drawn on the wall by visitors dating back to the early days of the power plant. Speaking of the power plant.... Inspired by The Edison Los Angeles, an actual power plant location, this new location is a feast for the eyes. From the moment you walk through the doors and see the grand clock to the time you descend the staircase to the lower level, your eyes will be overloaded. With real artifacts used throughout The Edison, the story of this former power plant is not hard to miss. The centerpiece is the Birchfield Boiler, what would have kept the power plant alive in the day, with seating and a bar located around it this will be in the background of many selfies to come. With three bars, guests are encouraged to roam and try different specialty drinks at each. I would suggest starting at the catwalk bar then making your way down to the Breaker Bar and finishing at the Boiler Bar as it may be a little hard navigating the stairs after the drinks on the lower level and going up.

The Edison will bring back a much-missed piece of night life to Walt Disney World that will feature live entertainment seven nights a week, including aerial acts, musicians and DJs. During the daytime, the performance area will be used as restaurant seating but, at 10 p.m., a cover charge and a bit of a dress code (no flip-flops type) will go into effect, harkening back to old Pleasure Island days. There will also be special drinks along with a “Bartenders Breakfast” serving breakfast dishes, such as Eggs Benedict. One of the unique things about the new location is you could spend an entire night in the building without having to step foot outside. With Enzo's Hideaway Tunnel Bar connecting the two main areas, you could enjoy a nice progressive meal of your own.

The Edison will hold its Gand Opening New Year's Eve Gala with tickets still available and the other locations are expected to open shortly thereafter. 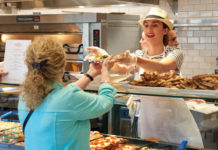