Like most kids in the 90's, I lived for Saturday Morning Cartoons. While the Disney Afternoon ruled my weekday afternoons, Fox Kids dictated my weekend mornings until ABC's One Saturday Morning took my attention away. Hulu recently debuted all episodes for two of my favorite Fox Kids series, Tiny Toon Adventures and Animaniacs, announcing two new seasons of the latter exclusive to the streaming network. After a 20 year hiatus, Yakko, Wakko, and Cute Dot will once again break out of the water tower. As a kid, I appreciated the silly antics of the show, but as an adult who has read up on Disney and animation history, it takes on a whole new meaning... also the double entendres.

Saturday morning kids programming began in the late 60's and was largely filled with 30-minute bundles of theatrical animated shorts, in addition to some Hannah Barabara original programs. Despite the boom of original content in the 70's and 80's, these bundled short programs continued in the lineup even into the early 90's, with short programs from Tex Avery, Loony Toons, and even Mickey Mouse still on the air. But by 1993 when Animaniacs hit the airwaves, those days were quickly becoming a thing of the past. Animaniacs presented itself almost like one of these shows, split into three short segments, but obviously fresh, new, and full of then-modern pop culture references.

The premise of Animaniacs, which is repeated at the start of every episode, is that the Warner Brothers and their sister were an old, unsuccessful animated short series. In design, they look like relatives of Felix the Cat, Mickey Mouse, Oswald the Lucky Rabbit, and WB's own answer to those icons, Bosko. In Animaniacs, the Warners shorts confused and offended the public, so the studio threw the cartoons in a vault never to be released (the Warners themselves were locked in the studio water tower, also never to be released). Looking at Bosko in particular, that character was an offensive, racist stereotype that WB eventually booted from its lineup and was likely a large source of inspiration for these monkeys coo-coo Warners.

On a Disney related note, Animaniacs was executive produced by Steven Spielberg and discussions around the show began as early as 1991, right around the time it became clear that Disney and Amblin Entertainment would be unable to reconcile differences over the future of Roger Rabbit. In theme, Who Framed Roger Rabbit has many similarities to Animaniacs and Disney even went their own route with a Roger Rabbit-inspired Disney Afternoon series that also premiered in 1993, Bonkers. Animaniacs had quite a large selection of short segments beyond the Warners, including a pigeon spoof of the R-rated film Goodfellas with "Goodfeathers." But my personal favorite has become Slappy the Squirrel, reason being that this character was an aging cartoon star who had the dirt on on the classic cartoon actors we all love. Of particular interest to me was the number of times her segments were used to reference and poke fun at Disney. From watching "The Wonderful World of Walnuts" on TV to introducing her bereaved grandson to the actress who played Bambi's mother to prove that she was alive and thriving in a nursing home, when I watch the show as an adult I become elated when a Slappy sketch begins. Even Slappy's hat, which features a drooping daisy hanging off the brim, harkens back to Minnie Mouse's earliest style.

The Disney references and jokes weren't limited to Slappy the Squirrel, with Yakko, Wakko, and Dot even spending entire segments poking fun at films like Beauty and the Beast and The Lion King. Jim Cummings even provided his Sterling Holloway impression to the series, most notably in the short "Goodnight Room." The series ended in 1998 after 99 episodes, meaning all of Disney's pop culture achievements since then haven't been properly mocked as only the Animaniacs an do. I am so excited by the prospects of brand-new episodes on Hulu and hope that you will all join me in binge watching all of the animated homages, mockery, and just plain silliness that was the original series. All episodes, movies, and spin-offs are now at your streaming fingertips anytime you wish to recapture your childhood. 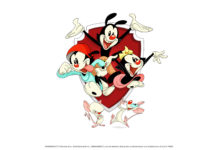