“Doreen Tracey was such a bright light…a joy to be around.”
Lorraine Santoli
The Official Mickey Mouse Club Book Family, friends and fellow Mouseketeers are remembering Doreen Tracey for her humor, warmth and smile. Tracey passed away on Wednesday at the age of 74 from pneumonia following a two-year battle with cancer.

Fellow original Mickey Mouse Club member Tommy Cole said, “she never failed to make us all feel good and we will miss her.”

When the Mickey Mouse Club premiered on the ABC television network in October 1955, Doreen was the ninth name announced in the official roll call. She remained with the afternoon after-school program through the end of its run in 1959. Perhaps Doreen Tracey was destined for a life in entertainment. Born in London in 1943 to show business parents, her family moved back to the United States where her father and mother opened a dance school in Los Angeles. At the age of four, the toddler learned how to dance and sing, two talents that would be required for her to audition and eventually become a member of the Mickey Mouse Club. At the age of 12, Doreen intercepted a phone call at her parents’ dance studio that would forever change her life.

In her 2010 book on the MMC entitled Why? Because We Still Like You, author Jennifer Armstrong recounts how young Doreen was sitting behind the desk of her parents Rainbow Studio in Hollywood, only to answer the phone one afternoon and speak to a gentleman by the name of Jack Lanvin. He announced that he was the casting director for Disney and inquired about getting some students to audition for a show. In her best grown-up voice, the pre-teen told the caller she knew of exactly the right girl for the job.

Despite her father’s reluctance to allow his daughter to get involved in show business, Doreen was able to convince him to take her to the audition. But to be fair her father also posted the audition notice on his school’s announcement board much to the disappointment of his daughter.

Once inside the Disney commissary she found herself among dozens of children all looking for a shot at the Disney brass ring. In Armstrong’s book, Tracey recounted how she appeared for the audition in a Little Bo Beep costume complete with hoop skirt and pantaloons. A bit intimidated at first, Tracey realized she had captured the attention of studio brass when producers smiled and chuckled at her audition. “The minute I saw their expressions, I knew I got the job. You know you can just tell,” she confided to Armstrong for her book.

In a 1995 interview, long after her career with Mickey Mouse and company was over, Tracey said that Walt Disney offered her fatherly advice as she was embarking on her Mouseketeer career. She recounted that Disney said her experience would probably be the greatest thing that she ever did in life. Tracey conceded that “he was right.”

During her time on the Disney lot, the star appeared in the Disney film Westward Ho the Wagons! with fellow Mouseketeers Karen Pendleton, Tommy Cole and Cubby O’Brien and Disney’s Fess Parker. She also appeared on the Mickey Mouse Club’s Annette serial and toured Australia with the Mouseketeers. Fellow Mouseketeer and friend Lonnie Burr fondly recalled for Laughing Place that “Dor” was one of the five girl club members along with four guys who lasted the entire run of the original series. Burr, who also dated Tracey in their post-Mouseketeer days, remembered the times that original castmates toured 30 counties including France, Japan, Australia, Russia “and all the Warsaw states” in support of the show.

Tracey was 15 when the original MMC was canceled but it did not mark an official end to her Disney career. She and some of the other Mouseketeers would be hired occasionally to do some Disney-related promotional work.

With her tenure on the Disney lot in her rear-view mirror, Tracey continued her showbiz career with multiple guest-starring roles on 1960’s TV shows before forming her own musical rock group, Doreen and the Invaders, touring Thailand and South Vietnam in 1968.

Following her trip, she returned to the United States and took a job as publicist to musician and composer Frank Zappa as well as a multi-decade career in administration at Warner Brothers.

She raised more than a few eyebrows in 1976 when the self-described black sheep of the Mouseketeers posed nude wearing nothing but a pair of mouse-ears for Gallery magazine. The stint caused a major rift between her and then Disney studio executives. “You get caught up in your own ego, not paying attention,” she told The Times adding that she came to regret the decision. She eventually reconciled with the Mouse House and was welcomed back into the fold. While out of sorts with Disney bosses at the time, she was never far from her fellow Mickey Mouse castmates. Lorraine Santoli, a former Disney executive and author of the book The Official Mickey Mouse Club Book, told USA Today that Tracey remained close to her Disney roots, maintaining long-time friendships with fellow Mouseketeers.

In a statement to laughingplace.com, Santoli said “Doreen Tracey was such a bright light. Her upbeat attitude about everything and her sense of fun made her a joy to be around. She was part of a very special tight-knit group known as the Mouseketeers who remained friends for nearly 65 years. We will miss her very much.”

Tracey became a regular participant in reunions, fan club events and conventions. She joined many of her co-stars in August 2015 at the D23 fan club convention in Anaheim to celebrate the 60th anniversary of the Mickey Mouse Club.

Divorced, Tracey is survived by her son, Bradley and two grandchildren, Gavin and Autumn and will be missed by family, friends, Mouseketeers and legions of fans around the world. 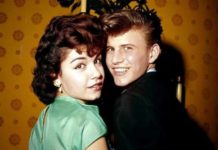