Minnie and Daisy are back for more fun with another DVD collection, this one designed to appeal to kids celebrating Valentine’s Day. Minnie: Helping Hearts curiously makes no mention of Mickey and the Roadster Racers or the Happy Helpers branding on the box. However, fans of the show are sure to love the 96 minutes of fun on this release.

First up is “The Happiest Helpers Cruise,” in which Minnie and Daisy help to make a Valentine’s Day cruise extra special for all of the guests on board. In a racing segment from Mickey and the Roadster Racers, Minnie and Daisy fill in as TV broadcasters for the big race. In “Adeventures in Buddysitting!,” the girls try to help a kid named Buddy make friends during a routine babysitting assignment.

The fun continues in “Lights! Camera! HELP!,” where Minnie and Daisy help a famous movie star sing beautifully in front of the camera. In “Grandpa Beagle’s Day Out,” the gals learn that getting older doesn’t mean you can’t enjoy life to the fullest. “Artful Helpers” finds Minnie and Daisy working a security shift at an art museum where they help save a priceless treasure.

Minnie and Daisy take the fashion world by storm in “Cuckoo La-La.” The final adventure is “Figaro’s New Friend,” in which Minnie and Daisy watch Pluto for Mickey, which makes Minnie’s cat Figaro jealous.

Despite the hearts all over the box and being released in close proximity to Valentine’s Day, the package only spends about 7-minutes on the subject of the holiday. However, Minnie and Daisy both have big hearts and each of the half-episodes featured on Minnie: Helping Hearts exemplifies that.

There are no bonus features, physical or on-disc.

Minnie: Helping Hearts is the second DVD release of Mickey and the Roadster Racers that cuts the episodes in half to focus solely on Minnie and Daisy’s Happy Helpers segments. The episodes feature fun scenarios that encourage kids to be become engaged with their friends and family to help out. This and the previous release, Minnie’s Happy Helpers, make great Valentine’s Day gifts for the little Minnie Mouse fans in your life. 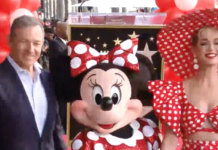