What did you do last weekend? If you're like me, you found yourself binge watching all 13 episodes of Netflix's new original series Unbreakable Kimmy Schmidt. It was a must-see for me, being a big fan of Tina Fey and 30 Rock, but for a series made by NBC/Universal I couldn't believe how frequently the series made Disney references. It quickly became one of my favorite shows of all time. And after returning to work, I discovered that everybody on earth was watching the show as well. It became very apparent that I should sit through it all again to share all of the great Disney moments with the Laughing Place community. You know, for research purposes...

For the unfamiliar, Unbreakable Kimmy Schmidt is about a twenty-nine year old who lives in a post-apocalypse bunker in Indiana, having been kidnapped as a child by a cult. When the police discover the hatch and free the victims, Kimmy finds herself in New York City for an interview on NBC's The Today Show, after which she decides to stay in the big apple. She moves in with a gay out of work actor named Titus Andromedon and becomes a nanny for one of the 1%, Jacqueleen Voorhees. Early on in the first episode (Kimmy Goes Outside!), Titus reveals that he auditioned for The Lion King on Broadway twenty times in fifteen years. His day job is playing an Iron Man knock-off in Times Square named Metal Hero Friend and the episode ends with Kimmy and Titus singing "Circle of Life" at the top of their lungs. In episode two (Kimmy Gets a Job!), Titus reveals that he once put on a one-man show version of The Lion King. He faces off against the man who rents out the counterfeit costumes, including a fake Woody from Toy Story and the most bizarre version of Miss Piggy ever. He tells him he has experience facing off with Disney copyright lawyers (a flashback to being sued for his rip-off production). Meanwhile, Kimmy tries to break through to the fifteen-year old that she is babysitting who snaps at her: "Disney lies to you. Stepmothers aren’t mean, nannies aren’t magical, and dwarfs don’t let you sleep in their house without expecting something.” Episode three (Kimmy Goes on a Date!) starts with a dream sequence where Princess Kimmy and Prince Charming return from the king's ball. In episode four (Kimmy Goes to the Doctor!), she brings in a TV she found on the side of the street. Titus replies with a whole lot of snark, saying "Ariel, this thingamabob is not going to work!” Tony winner James Monroe Igelhart (Genie in Aladdin) plays Titus' nemesis as he auditions for Spider-Men 2: Too Many Spider-Men on Broadway. When Kimmy accompanies him to the talent agency and is recognized from somewhere, she is asked “Are you the girl from The Bachelor whose butt prolapsed?,” referring to the hit ABC reality series. Flashing forward through some hilarious non-Disney moments, episode seven (Kimmy Goes to a Party!) features her employers wealthy husband. He gets on his cellphone and demands “Put Walt Disney’s head on the phone." After a pause, he exclaims "Then wake it up!” After a few minutes talking to his wife, he returns to his phone. "Hello, Walt." Later, Titus gives Kimmy a makeover at their home. "I feel like Cinderella," she says as she notices the rodents on the bed. "And look, the birds and mice are helping!" And the music in the background is a piece from Tchaikovsky's score of Sleeping Beauty. At the party, Kimmy mispronounces a man named Beakman as Beaker. When he says "I'm not a Muppet scientist," she replies "Bunsen Honeydew was the scientist, Beaker was just his assistant." In episode eight (Kimmy is Bad at Math!), Kimmy and her GED classmate Dong, who is here illegally, find what they believe is the fountain from NBC's Friends. When a cop busts them for splashing in the fountain, Dong exclaims "I'm Richard Pennsylvania from Epcot!" In episode twelve (Kimmy's Goes to Court!), Kimmy travels back to Indiana to testify against the man who held her captive. Titus decides to take all of the media attention by being her representative. On live TV, he says "Please rise for the National Anthem." He then proceeds to sing "For the red, white & blue, the funny things you do. America, America, and this is you." If those lyrics sound familiar it's because they are the theme song from ABC's America's Funniest Home Videos. The final episode (Kimmy Makes Waffles!) features the last reference. Kimmy's landlord Lillian (Carol Kaine) confronts her employer, who she feels threatened by. She says "I know how you rich people treat the poor. I've seen Cinderella." It's incredible how many Disney references are found in this non-Disney production (more than most ABC shows take advantage of). For fan's of Disney Broadway shows, you might also feel a Disney connection in every episode. It's because Tituss Burgess, who plays Titus Andromedon, was Sebastian in the original cast of The Little Mermaid on Broadway and his voice is unmistakable. Netflix has already ordered a second season and I can't wait to see what other Disney references lie ahead in Kimmy's future. 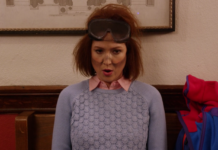 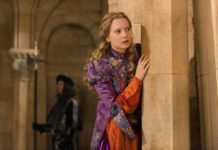