As a collector of Disney music, I was very excited about the Silly Symphony Collection... until I found out that it would only be available on vinyl. In partnership with Fairfax Classics, Walt Disney Records has lovingly restored the soundtrack to every Silly Symphony short. For the uninformed, the Silly Symphony series ran from 1929 to 1939 and introduced such famous shorts as The Three Little Pigs, The Old Mill and The Ugly Duckling.

The audio to all 75 Silly Symphony shorts is split between 8 volumes, each containing two double-sided LP records with an average of 3-4 songs per side. As stated, the only way to purchase this set is on vinyl, but the set does include a digital copy of every song. This 16-record set is priced at $399.98, which isn't bad when you compare it to Disney's other recent vinyl releases, which average $40 for one record. The packaging looks gorgeous and I'm particularly fond of the artwork on the individual sleeves. The box set is limited and each collection is individually numbered. Each jacket features detailed notes by J.B. Kauffman and Russell Merritt about each and every short. For review purposes, I was granted access to listen to digital copies of the set. I haven't held it in my hands or paged through the contents, but I did see them on display at the D23 Expo last August and I can attest to the fact that the set is as gorgeous in person as it appears in the pictures. The liner notes on each short appear to be extensive and will almost certainly enhance the listening experience. While the packaging is exquisite, the real quality test is how do these tracks sound? I was delighted by how well these elements have been cleaned up. In general, the audio quality improves as you proceed through the set, most likely due to a mix of better source materials and improvements made in the recording process during the decade depicted in this collection. There is one track that sounds like it may have deteriorated beyond repair, which is "The Cat's Out" from Volume 2. The most famous shorts sound like they received the most love and care, with "The Three Little Pigs" sounding better than the short does on DVD. In fact, the restoration on these tracks is so well done that it makes me even more upset that Disney didn't do a more recent restoration on the Pinocchio soundtrack earlier this year when they released it as part of The Legacy Collection. If you're a vinyl collector and a Disney fan, this release is a must have. While the vinyl set looks and sounds magnificent and is priced well, I am sad as a modern-day consumer of music that this isn't being made available in any other capacity. A CD set could have easily replicated the textual contents and artwork in a more affordable (and more consumable) medium. A digital-only collection also wasn't outside the realm of possibility, especially since it's included with the vinyls. But when I listen to music, I'm usually on the go. If I'm at home, I would rather watch the shorts than listen to their audio on a record. That is the inherent problem with this release. On top of that, if Disney Home Entertainment were to re-release the entire shorts collection on DVD or Blu-Ray, it would be a 4-disc set and the price wouldn't exceed $100, but this set expects you to pay four times that amount to own half-the experience on a non-portable medium. But I guess the silver lining is that the next time Disney decides to release these shorts again, the audio has already been cleaned up. 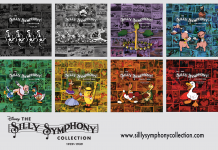