Welcome to Disney Extinct Attractions. My name is Cole Geryak, and this week I'll be your guiding firework through some of Disney's more recent nighttime spectacles.

Tonight is the final showing of Celebrate the Magic, the Magic Kingdom's projection show on Cinderella Castle. While it's disappointing that the show will be leaving us, I am excited that I was finally able to put out a blog post about an extinct attraction on the day that it closed (a bit selfish, I know). But this post dives deeper than simply Celebrate the Magic, so let's jump back to 2011 and work our way back to the present.

2011 marked the beginning of the "Let the Memories Begin!" theme throughout the Disney parks. Marketed as a time for families to gather and make memories that would last a lifetime, this promotion did not feature the gravitas of some of the parks' larger events like the "Year of a Million Dreams" or the "Diamond Celebration." Because of that, not much changed or was added in the parks, with the exception being a nighttime projection show known as The Magic, The Memories, and You.

Opening in Disneyland and the Magic Kingdom on January 18, 2011, this spectacle featured the first major use of projection mapping in the Disney Parks. For those of you who may not be familiar with that term, projection mapping is a type of technology that allows Disney to project images onto a three-dimensional surface with many different edges and facets. Doing so, Disney can completely transform the look of the exterior, allowing for spectacular nighttime viewings.

Interestingly enough, Disneyland opted not to use Sleeping Beauty Castle for their version of the show, opting instead to utilize it's a small world. For some reason, I don't remember ever getting the chance to see this show at Disneyland (though it's probably because my parents never liked staying late when we visited). But I took the chance to watch the show on YouTube, and I was surprised by how much I enjoyed the show and how innovative it was. If you want to take that opportunity, as well, you can see the videos for both the Magic Kingdom and Disneyland versions below.

As you can see in either video, there are photos and videos of assorted guests integrated into the show at various points. Amazingly, all of these images were taken by Disney PhotoPass photographers throughout the day and incorporated into that night's show. I wish that we could see more innovative ideas along those lines in attractions today because I can only imagine how cool it must have been to see your face displayed on such iconic landmarks.

The Magic, The Memories, and You stayed in touch with the times, changing certain scenes to celebrate holidays and seasons such as Valentine's Day or the summer. I love when attractions change throughout the year because it shows that the Disney parks are not some static force. They are always changing, primarily to mirror the real world. Unfortunately, that change was not enough to keep the show fresh because it closed in both parks on September 3rd, 2012 to make way for new shows.

In the Magic Kingdom, the show was replaced by our friend Celebrate the Magic (just a little bit longer before we talk about that, don't worry). Over in Disneyland, The Magic, The Memories, and You wasn't replaced by another projection show . . . immediately. Instead, its budget was used to help pay for the daily shows of Mickey and the Magical Map starting in 2013.

On May 22, 2015, Disneyland finally received its new projection show (sort of) in the form of Disneyland Forever. Disneyland Forever featured the most ambitious use of projection mapping that Disney had ever created. Not only was Sleeping Beauty Castle projected on, but also the Matterhorn, shops of Main Street USA, it's a small world, and water screens on the Rivers of America. The scope of the entire show was beyond any fireworks show that Disney had put on before, combining the beautiful projections of The Magic, The Memories, and You with the amazing fireworks that Disney always seems to create.

The show takes guests on a musical journey through many different Disney films, all themed around different sections: Opening, Clouds, Enchanted Places, Jungle, Sea, Snow and Finale. Each section features multiple songs, all of which seamlessly incorporate the projection mapping techniques on all the structures mentioned before.

As you can probably tell, these fireworks are my favorite fireworks display ever. I'm not a huge fan of fireworks simply by themselves, so making it a full spectacular appealed to me. Over its time at the park, I truly fell in love with these fireworks. And now that I've successfully hyped them up, you have the chance to see them for yourself. I showed this video to my friends who had never seen it before, and they loved it, so I hope you'll feel that same type of affiliation if you've never seen the show before.

But contrary to the name, these fireworks could not last forever, coming to a close with the end of the Diamond Celebration on September 5th, 2016. Many fans were distraught that we'd be losing these fireworks, but I had predicted it a while back because the fireworks did have some specific parts that related to the 60th anniversary. However, I was hoping that we would get a reworked version of the show, containing similar projections and such. Unfortunately, that was not the case, as Fantasy in the Sky returned to the Disneyland skyline, bringing back the park's original fireworks display.

The company has undergone a lot of budget cuts recently, so that is presumably the primary reason we lost the big budget fireworks display that was Disneyland Forever. Though I do believe that once the company's financial times turn back around, we'll see a show of Disneyland Forever's caliber again.

So now that we talked about the replacement in California, let's head back across the country to the reason for this article, Celebrate the Magic.

Debuting in the Magic Kingdom on November 13th, 2012, this nighttime projection show has graced Cinderella Castle for years. Utilizing the same projection mapping system as we've been discussing, it took the technology from The Magic, The Memories, and You and one-upped it. All of the projections in this show look phenomenal, and the castle really undergoes some amazing transformations throughout the show.

I was lucky enough to get to see this show twice on my last trip to Walt Disney World (about which a three-part article will be coming in the subsequent weeks, so get psyched). Before the trip, I had never seen the whole show, and I truly regret that now. The show was so well put-together and truly a blast to watch. They made changes to the castle (through the projections, of course) that I would not think were possible. But that's just Disney being Disney, making the impossible come true.

If my excitement is rubbing off on you, be sure to check out the video below. The coolest part, in my opinion, appears around minute 9:45, so if you choose to just watch one portion, make sure you watch that.

Celebrate the Magic was much like The Magic, The Memories, and You in that it had the ability to be changed regularly to reflect the time of the year. Throughout the years, many different properties had the chance to be a part of the magic, even overlooked ones such as Phineas and Ferb and Wreck-It-Ralph.

One of my favorite facts about the show is that Celebrate the Magic was actually one of the first places Frozen Fever hit, with the Frozen part of the show debuting eight days before the general release of the film to the public. Whoever made the decision to include it earlier deserves a promotion for having so much foresight.

But Celebrate the Magic has finally run its course in the Magic Kingdom, meaning it is time for us to welcome a new show to the Walt Disney World family. Once Upon a Time will begin its run tomorrow, leaving no day without a nighttime projection show (something I love because visiting guests won't feel like they are missing anything). I'm really excited to see what Once Upon a Time will bring to the table because, from all that I've heard, it is a fantastic show.

I am a bit curious, though, as to why Disney decided to end Celebrate the Magic's run with only a week's notice. It is such an abrupt end for such a celebrated attraction (pun intended). I'm sure that as time goes on we'll learn more details about what happened to cause the change.

And that brings us to an end of our viewings of a few of the nighttime shows to grace the Disney skies in the last few years. But that's not the end because they will always live on in our hearts.

Now, as usual, here's your look at what is coming up next week.

I hope you enjoyed this article! As always, I love hearing what you think, so you can reach out through any of the contact options near my bio. Last week, I received a very nice message from a fan on Twitter that made my day, so who knows, this week that could be you! Also, if any of you happen to go to the final show of Celebrate the Magic or the first show of Once Upon a Time, let me know because I'd love to hear all about the craziness that I'm sure will occur!

And as always, have a magical day! 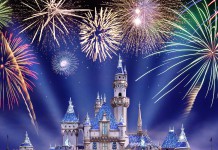 Prepare to Be Dazzled! Disneyland Reveals More Details for the Upcoming 60th Birthday 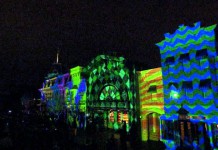 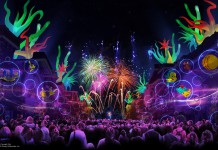