Welcome to Disney Extinct Attractions. My name is Cole, and today I'll be your guide through the wilderness of Disney Parks unknown.

Now that it's the middle of October, Halloween is in full stride at the Disney Parks. As everyone knows, Halloween is the time where the spookers come out to wreak havoc on the world. It is a period where imagination runs rampant, and creatures from beyond our realm come to the play.

Disney's Animal Kingdom is home to animals on a scale unlike any Disney Park or zoo in the world. Everywhere you look, you see the animals of our world, but something was always missing, the animals of the worlds beyond.

Imagine if you will, that you turn left as you enter the park and make your way towards the realm of the unknown. Excitedly, people giggle around you as they plan out their time in the Beastly Kingdom of mythical animals. You follow the couple in front of you as they head through a medieval village towards the Dragon Tower, home to close encounters of a monstrous kind. As you load onto the mine-cart-style roller coaster of the Dragon Tower, your heart keeps beating as you fight off the urge to run away from the frightful experience. But you hold your ground, and the cart takes off through a cavern type area.

Your train winds its way through the Tower, careening around turns before facing off against the ferocious dragon. You narrowly escape and make your way back to the station, grateful that you had made it out alive.

With that harrowing journey out of the way, you decide that it's time for some lighter fare and head under a bridge toward the Quest of the Unicorn maze. You wander through the maze looking for the clues that will help you unlock the door leading to the titular unicorn. Each way you turn, you keep finding dead ends, but once you find the first clue, you are off to the races. You hurriedly continue around the maze before finally finding the last key.

Elated that you had done it, you walked into the Unicorn's cave. Its beauty was unlike anything you had ever seen, immediately leaving you breathless. You stand transfixed staring at the unicorn for five minutes before finally deciding to move on throughout the rest of the Beastly Kingdom.

You continue to meander your way through the land before you end up in front of the Fantasia Gardens. As you wander through the queue, you hear the joyful music of Fantasia. Eventually, you find your way to the boats that take you through the first dark ride to be based on a film featuring Mickey Mouse.

Your boat took you on a journey through the lighter side of the film, keeping your positive feelings from the Quest of the Unicorn alive. The peaceful tones put you at ease, so by the time you leave your boat, you are ready for anything that the world can throw at you. With all the major attractions accomplished, you sit down at a bench and relax before facing the rest of your day in the Animal Kingdom.

Now all of these attractions would have been so cool if they had ever existed. The attractions all had so many cool ideas in them with their influences still being seen today.

Though the Alice in Wonderland maze opened in Disneyland Paris in 1992 (six years before the Animal Kingdom), many of its elements were going to be incorporated into the Quest of the Unicorn maze. As one of the few mazes in the Disney attraction library, I'm sure that the Beastly Kingdom maze would have been one of the most unique attractions that we've ever seen.

But the most interesting manifestation of the Beastly Kingdom has to be what happened to the Dragon Tower.

After it seemed clear that the Beastly Kingdom would not be making its way to the Animal Kingdom, some Imagineers moved over to Universal and took the idea for the Dragon Tower with them. In the Lost Continent area of Islands of Adventure, the medieval village fit perfectly with the rest of the area. The Dragon Tower transformed into Dueling Dragons and became a more pedestrian roller coaster that lacked the dark ride aspect. With this attraction at Universal, Disney could no longer build the Dragon Tower, so the plans to add the Beastly Kingdom in the park's Phase 2 slowly died away.

Planned to be located where Camp Minnie-Mickey was, Pandora ultimately moved in and officially brought the chance of seeing the Beastly Kingdom to an end. However, the land had been planned since the beginning of the park, so you can still find evidence of it today.

As you can see from the logo, you can still find a dragon of the official signage for the park.

This dragon also graces the entrance to the Animal Kingdom, serving as another reminder of this land that could have been.

And finally, the reminders truly begin as soon as you enter the parking lot, where one of the signs showcases a unicorn. I really appreciate that Disney has kept these references to what could have been because it shows their reverence to keep the memories of these lost attractions alive.

Overall, I think that the Beastly Kingdom is one of the coolest ideas for a land, and I really wish that we could have seen it become a part of the Animal Kingdom. The Dragon Tower attraction especially struck my fancy and having been on the Dueling Dragons, it never lived up to what it could have been. However, I have heard that Pandora is pretty amazing, so I'm excited to see the land that ultimately took its place.

So now that we've looked at what could have happened in Disney Parks past, here's a peek at what is going to be happening on this blog next week.

I hope you enjoyed learning about this lost Disney land because I know I definitely learned a ton. It's always especially interesting to learn about attractions that never existed.

So with that nugget of truth, have a magical day! 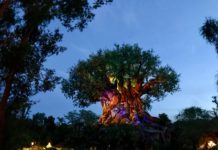 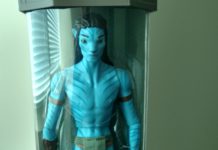 Who Wants To Be A Na’vi Action Figure? 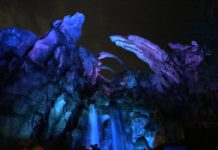 Pandora: The World of Avatar Comes Alive at Night; While the Tree of Life Sparkles