Welcome to Disney Extinct Attractions. My name is Cole, and today I'll be your Grand Marshal in some parades of yesteryear. 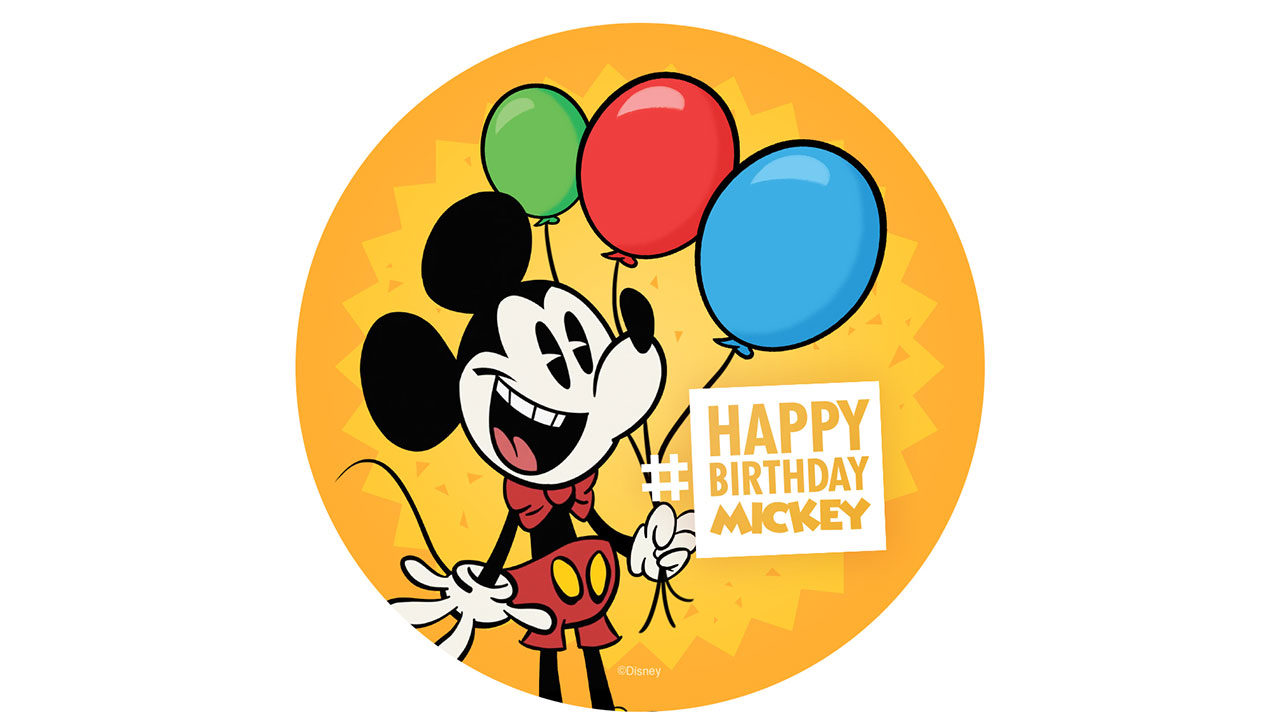 This Saturday, Mickey Mouse will turn 89 years old. He is one year short of the magical 90, a year in which Bob Iger has promised that a big deal will be made out of Mickey's birthday. The last major Disney Parks Celebration was the Diamond Celebration in 2015, but Mickey's birthday is a large enough milestone that I would not be surprised if we saw some sort of celebration or promotion at parks around the world.

Now speaking of celebrations, one of my favorites was the 100 Years of Magic Celebration — an event that commemorated the anniversary of Walt Disney's birth. The hub of this celebration was Walt Disney World, where each park at the resort got a brand new parade to join in the festivities. 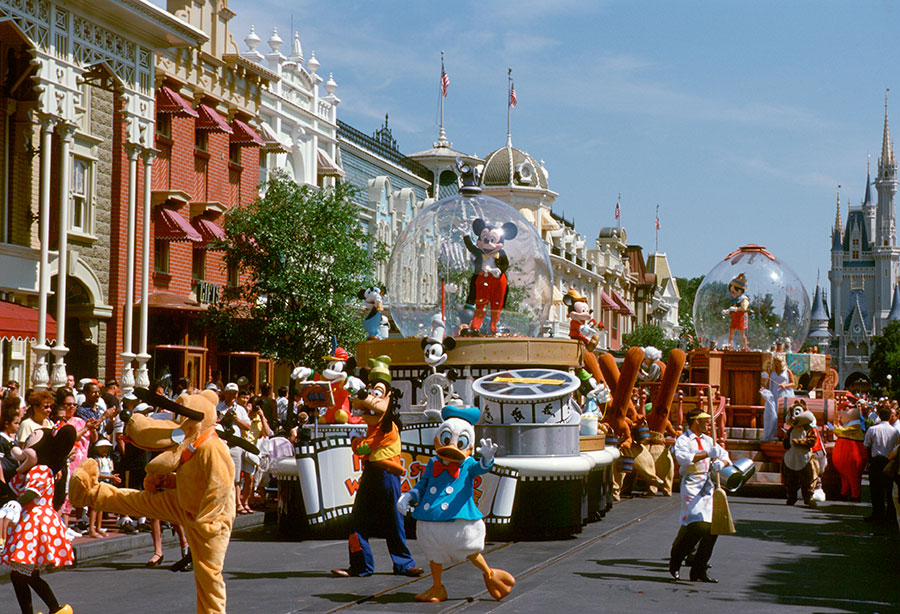 On October 1st, 2001, the Share a Dream Come True Parade was welcomed into the Magic Kingdom. As you can see, there were giant bubbles on each float that were actually snow globes. Personally, I thought they looked a little bulky, and I felt really bad for how hot it must have been inside of them during the summer season. But take a look below and you can decide for yourself.

Other than the snow globes, I thought this parade had a lot of fun elements, plus it included many rare characters. 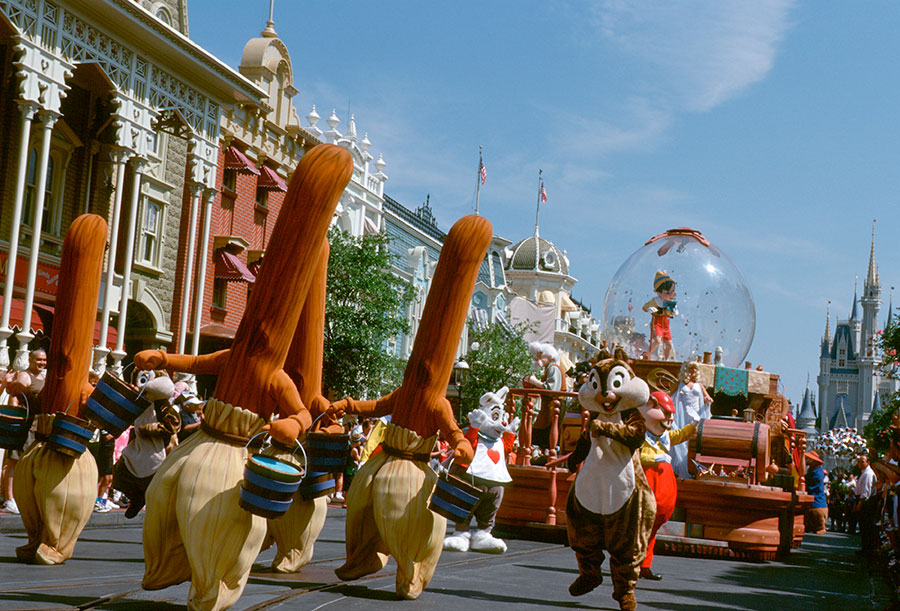 First, the Fantasia brooms made an appearance in full splendor. Normally, they are relegated to animation within the parks, so the fact that they had full walkaround outfits in the parade was a pleasant surprise.

Now, the float that raised the most questions was the "A Hundred Thousand Dreams to Bee" float, mainly because of Pooh himself. It certainly makes sense to have Pooh on the float given the name, but I'm a little uncertain how he fits with Dumbo, Aladdin, and Mary Poppins, who all have some kind of flying theme going on. But the magic of the Disney Parks is the float doesn't necessarily have to make sense to be awesome.

And finally, we've come to the coolest float in the parade, the villains float. Normally, I don't fall into the hype around the Disney villains, but I have to admit that I'm a huge Chernabog fan. Chernabog is arguably the most malicious villain in the entire Disney canon, practically being Satan himself. He rarely makes his way into Disney attractions, so the fact that he made his way into a parade is awesome to me.

Overall, I thought this parade was fun, but I was surprised it lasted in the Parks in some form as long as it did. Five years after the celebration, the parade changed names to the Disney Dreams Come True Parade, with the only major change being the removal of the snow globes.

After another few years, the parade changed names again on January 23rd, 2009 to the Celebrate a Dream Come True Parade to commemorate the What Will You Celebrate? promotion. Here, many of the floats got a slight cosmetic overlay to better fit the theme of celebration. These changes gave the parade a little bit more life before its ultimate closure on January 4th, 2014 — over 12 years after the opening date.

For a run-of-the-mill parade, the 12-year length was very respectable. Plus, it helped pave the way for the Festival of Fantasy parade, still a Magic Kingdom staple today. 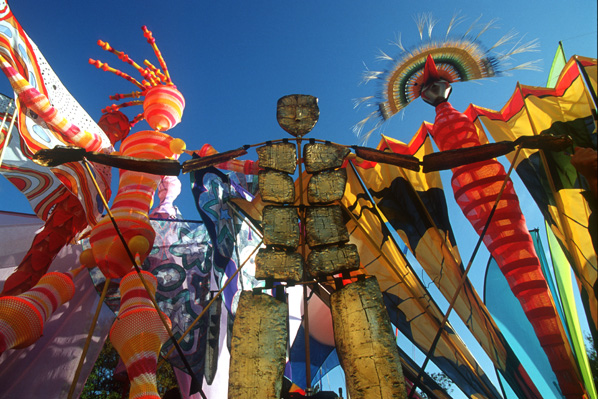 Earlier, I mentioned that each of the parks got a new parade, with Epcot receiving Tapestry of Dreams, a rehashing of the Tapestry of Nations. However, if you click on the link it will take you to an entire post that I wrote about the parade, so you can think of it as an addendum to this article.

The next parade on our list made its home in Disney's Hollywood Studios and was truly emblematic of the park as a whole. Also debuting on October 1st, 2001, Disney Stars and Motor Cars was one of the coolest parades to hit the Disney Parks. Framed as the characters making their way to a Hollywood premiere, all of the characters got to ride around in fancy cars themed around their films.

All of the cars had some really interesting designs, but right now I'm going to choose some of the ones that I thought were the coolest in case you didn't get the chance to watch the parade.

Few people remember that Disney used to own the Power Rangers, with their Disney Parks home being Hollywood Studios. Their being featured in the parade gave them more of a sense of purpose, that is always nice to see in a franchise. 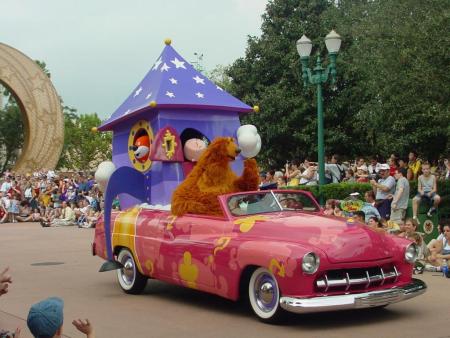 The parade also had a Playhouse Disney float, featuring Bear and his Big Blue House (sans the frightening moon, however). I loved Bear and the Big Blue House, so seeing them in the parade was a blast from the past.

My second favorite float was the Aladdin float because of how cool it looks. Having the car shaped as the Genie is so genius and is totally something you could see the Genie doing to help his pal , l.

But the best float had to be the Landspeeder. Leia and Luke got a chance to be in the park long before Star Wars: Galaxy's Edge was even an idea, and as a huge Star Wars nut, I was so happy when I saw them and Darth Vader appear.

Overall, Disney Stars and Motorcars was one of the coolest parades I've ever seen, and I even have some vague memories of the parade from when I was very young. Sadly though, the parade grew stale to guests, and the attraction closed on March 8th, 2008 to make way for the Block Party Bash. However, its journey was not quite over as part of the parade made its way to Walt Disney Studios Park in Disneyland Paris from April 4th, 2009 until July 3rd, 2014. That five-year stretch was a pretty healthy lifespan for a transplanted parade, and I'm glad that this awesome parade had a chance to see new life until the Disney Cinema Parade took over.

The first thing that struck me about this parade was how cool the character's costumes were. The parade featured a ton of different characters from across the Disney pantheon, including Rafiki and B'rer Rabbit. Each of the characters had a special outfit that they got to wear, all of which looked a little peculiar on the characters, but in a good way.

But the best part of the attraction was that lucky guests were chosen to be in the parade each day. I would've loved to have been that lucky person, who got to sit around and wave at guests all parade. Plus, the parade had a super catchy song that I would have been able to dance along to the entire time. Even so, I was dancing around in my seat watching the parade, and I enjoyed it as a whole a lot more than I thought I would.

Mickey's Jammin' Jungle also had a great journey in the park lasting until May 31st, 2014, a time of over 13 years. Many parades barely even last three years, so 13 years is truly an accomplishment. But ultimately the parade needed to close to make way for Pandora - The World of Avatar. Overall, all of these parades were quite a show and will long be remembered.

Now looking at next time, here are some clues as to what we'll be seeing next week.

Thanks for reading this week, and I hope that you enjoyed learning a little more about the 100 Years of Magic Celebration. Also, I know I promised we'd be talking about the World According to Goofy, but Mickey's Jammin' Jungle fit a lot better, so I had to make some changes.