Welcome to Disney Extinct Attractions. My name is Cole, and I'll be your tour guide on today's trip back to Disney Afternoon past.

As you may have heard, DuckTales (woo-oo) has made a resurgence on DisneyXD, and it seems to be doing pretty well both critically and commercially. To be honest, I haven't seen the show yet because 1) I don't have a ton of time in my college schedule and 2) I never really got into DuckTales (woo-oo) when I was younger. The show ended before I was born, so I never really had the chance to get into it or any of the other Disney Afternoon shows.

Disney Afternoon in 1991 was primarily made up of the shows DuckTales (woo-oo), Chip and Dale Rescue Rangers, TaleSpin, and Darkwing Duck. These shows had a huge following that continues today, so Disney decided to incorporate the shows into Disneyland.

Taking over from near the entrance to the Storybook Land Canal Boats and going all the back to it's a small world and the Videopolis Theater, Disney Afternoon Avenue was almost its own self-contained land. Staged during the summer of 1991 (with some of the features staying until 1992), the semi-land functioned similarly the promotional events that have occurred at the Disneyland Resort recently, such as the Season of the Force and the Summer of Heroes.

As you can see from this photo, Disney Afternoon Avenue was primarily comprised of overlays and character meet and greets. The area added a ton details to the area, especially in the color department. These buildings were vibrant and bring to mind the old Cinderella Castle 25th Anniversary decorations.

One of the highlights of the area was the overlay of Fantasyland Autopia to become Chip n Dale Rescue Rangers Raceway. (Until 1999, Autopia was split between Fantasyland Autopia and Tomorrowland Autopia, with a Midget Autopia even being thrown in at one point.) Personally, I have never been a huge fan of Autopia, so adding this overlay is pretty cool in my book.

The Motor Boat Cruise also got an overlay to take guests to Gummi Glen, based on another Disney Afternoon show, Adventures of the Gummi Bears. While this overlay really only consisted of adding some cutoffs along the side of the path of the ride, I appreciated that Disney tried to add a little bit of flair to this attraction that, admittedly, was not the most popular.

And finally, your trip through the Avenue would take you near it's a small world where you could meet a bunch of characters, most notably Baloo. Though this picture shows Baloo to the right of small world, his actual home was to the left, right underneath the bridge that now leads to Toontown. Toontown had still yet to open in Disneyland at this point, so Baloo was able to receive a lot of face time in his own little area at the very back of the park.

But that wasn't the only place you could see Baloo, as he was also one of the stars of arguably the biggest part of Disney Afternoon Avenue, the show Plane Crazy, named after the first ever Mickey Mouse short, though not featuring the main mouse himself.

Taking over the Videopolis Theater on March 15th, 1991, along with the rest of Disney Afternoon Avenue, the show brought together characters from across three of the most popular Disney Afternoon shows: Chip and Dale from Rescue Rangers, Launchpad McQuack from DuckTales (woo-oo), and Baloo from TaleSpin. This gang was tasked with stopping Don Karnage and Fat Cat, who had stolen an X-22 spy plane.

I actually enjoyed this attraction a lot, especially considering that I had never any of the TV shows that this show mentioned. It combined a spy plot with the Disneyfied humor that you would expect from a show of this type. Plus, the show had a few songs thrown in, so there was a little something for everyone throughout.

After Don Karnage and Fat Cat stole the plane and shrank it, our heroes were brought together by the FBI to catch the hooligans. All of the heroes were pilots within their respective television shows, so they really made up the dream aviation team.

In addition to musical numbers like the one above, there was also an airplane fight that worked really well considering that it was on a simple stage. (Though there were no characters literally flying across the stage, unfortunately.) All of our heroes teamed up in their own plane and had to avoid the pesky villains as they tried to shoot the hero plane down. Eventually, Don Karnage and Fat Cat actually managed to succeed, and the heroes' plane spiraled out of control.

Somehow, their plane managed to land on the same tropical island where the villains had landed (crazy, I know), giving our heroes one last chance to recover the spy plane. Fully disguised in island garb, the gang managed to infiltrate the villain's defenses and steal back the plane.

The villains still thought they had won, but little did they know that the audience had been listening the whole time and was able to tell our heroes how to enlarge the plane. It turns out that all they had to do to was pour water on it, leading to one of the most climactic parts of the entire show. An entire blow up plane appeared on stage, and our heroes had saved the day.

I talked a little bit about how the show crossed boundaries by being a musical, comedy, and spy flick simultaneously. It helped the show transcend from being your normal Disney show to a standout show, especially because of the spy aspect, which isn't often seen in Disney properties. (Let's not even think about Cars 2.)

My favorite part of the show was when Don Karnage kept calling Fat Cat, "Cat Fat." It was such a simple, silly joke, but those are my favorite kinds of jokes, and I quite literally laughed every time they said it.

As mentioned earlier, Disney Afternoon Avenue was always intended as an overlay more so than a permanent addition. So everything in the area was ultimately removed between 1991 and 1992, simply to return to normal. The Avenue had enough success though, that it showed that Disneyland had a market for an area based around their more popular cartoon characters, and so Mickey's Toontown became a full member of the park in 1993.

Within it, Chip and Dale managed to live on with their own treehouse, and their fellow Rescue Ranger, Gadget, got a roller coaster called Gadget's Go Coaster right next to the treehouse. I love that something like Disney Afternoon made enough of an impact to remain in the parks permanently, and it keeps a little part of Disney Afternoon Avenue alive to this day.

Sadly, that brings our time to a close today, but not without a look at what is coming next week.

Thanks for reading about this temporary overlay that foreshadowed the summer events that we see today. Also, my clues from last week are not what ended up being discussed this week, so my apologies to those who look forward to figuring out what next week's post will be. (I realized that one of the shows that I wanted to write about, I had already discussed before. Oops.) 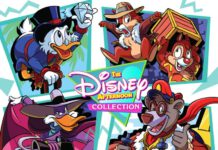 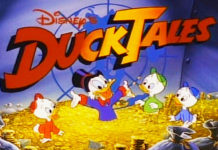 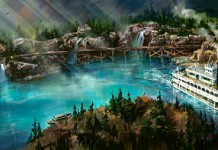