This year, for my wife and me, Valentine's Day was really a continuation of Christmas. Our holiday gift from our friend Aaron Wallace had been tickets to see Amy Grant in Kansas City on February 14th. Making the gift truly special was that he and some of our other Floridian friends we hadn't seen for a while would be coming as well, making KC a bonus stop after some of them took a vacation to New York City. For us, the venue was a little closer but still required a three-hour drive north to meet them. Perhaps the biggest difference between planning a roundtrip in California or Florida and planning on in the Midwest is the chance of snow. Throughout the week the report kept shifting and it was unclear whether snow might get in the way of our various drives and flights. Luckily everything went fine except my wife and I did wake up at the 4:30 a.m. in an attempt to avoid some freezing rain in our part of town.

Once I realized how early we'd be getting to town, I asked my friend Natosha if she wanted to meet up for breakfast. I've actually known Tosha since high school but this was only the second time I've seen her since. The first was a few months ago when I drove up to KC to see Third Eye Blind. On that trip, the first thing we did after seeing each other for the first time in 10 years was hide in her apartment's bathroom as a bad storm including tornado warnings had just moved into town as I was nearing. So this was also to be my first time not seeing the city with flooded streets and crazy dark clouds.

After grabbing some coffee, Tosha asked if we might want to go to the Legoland Discovery Center just a few minutes away as her son was itching to go. Unlike the parks in California and Florida, these Centers actually require you to have a kid in your party to gain admittance. Since that wouldn't normally be the case for me and I do love Legos, we decided to check it out. We knew there'd wouldn't be a whole lot for adults to do, but Lego displays of Kansas City and Oz were both very cool (including a Lego version of where we saw the Amy Grant show):

After Legoland and saying goodbye to Tosha, it was time to meet up with Aaron, Reuben, Albert, and Marielle as they had just landed and checked into their hotel room. With six Disney geeks gathered in Kansas City, what else was there to do but explore for some Walt history? This meant visiting the building that was once home to Laugh-O-Gram Studios.

As we pulled up, our Uber driver was a little confused as to why he was dropping us off at an abandoned building in a not-so-great area but we attempted to explain. Over the years, there's been an effort to turn to site into a museum but that has yet to come to fruition. However, the building has been restored somewhat and has some art on it to let you know you're in the right place Covering the windows (or where there were windows) on the second story of the building are original pieces or artwork from cartoonists that Walt has influenced over the years. You may recognize some familiar faces if you look carefully at this photo: While it was very cool to see this piece of Walt Disney history, there wasn't too much to explore after walking the exterior for a few minutes. And so, with that, we got another Uber and headed out to eat before the concert. Since the rest of the evening was more or less Disney free, I'll just summarize by saying that the venue and Amy's voice were both beautiful and it was great to catch up with friends.

After a short walk back to their hotel, it was time to go our separate ways. What's funny is that, even though Kansas City is only three hours away for me and I could go anytime, I couldn't have experienced it the same way without my friends. Who else would visit an old, random building with me or use their kid so that I could go play with Legos? While I plan on going back to KC in the future, I doubt it will ever be like this again. 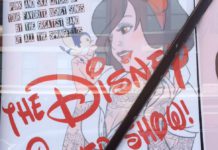 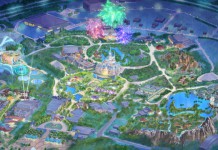 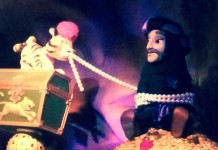