Disney characters from my favorite mobile game, Disney Crossy Road, have leapt out of the phone and into the real world. Moose Toys has created several lines featuring the 8-bit Disney character designs; small minifigs about the size of Lego minifig, larger sized figures with a hook so you can hang from backpack or keychain and cuddly plush versions, too. Upon opening the figures, my son grabbed the game and began to evaluate each figure, noticing what details did and did not make it from the screen to the toy. He poured over each figure while I enjoyed seeing him exercise his observation skills.

The plush version is a bit disappointing as the 8-bit block style is hard to bring to the cuddly plush. I wish they would’ve gone with a structured foam core that allowed the plush enough structure to stand and would’ve maintained the 8-bit sharp edges yet be squishy.

The Disney Crossy Road Mini Figures do not have any movable parts but my son had a good time making a couple of stop-motion films with them. They are about as tall as a Lego minifig. Currently, in Series 1, they have released more than 40 figures.

The figures are sold individually through blind box sales and in a four-pack where only one of the figures is hidden. In a fun twist, they have released six Limited Edition figures that come with a small card you scan to bring the figure to life within the game as a playable character:

Twelve characters, including Mickey, Minnie, and have been released in the Series 1 Disney Crossy Road Hanger (A.K.A. keychains). These figures are taller than the minifigs and our Donald’s legs moved back and forth so that he could be positioned as if walking across the table. They are sold individually in blind pack bags for $4.99 and feature a square hoop for hanging off a backpack or keychain. 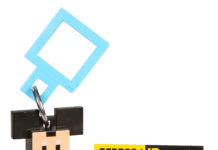