After nearly two decades waking up to Mike & Mike’s “Back & Better Than Ever” on ESPN Radio, sports fans (including this one) are adjusting to a new normal as that show’s Mike Golic and his new partner Trey Wingo finally began their new morning radio show, Golic & Wingo, that was announced so many months ago. During its premiere episode, Trey Wingo asked listeners to “enjoy the transition.” As a longtime Mike & Mike listener and regular ESPN consumer, listening to the new show, I’m most eager to watch Wingo’s transition. As expected, Golic & Wingo are a pleasant morning discussion of the top sports stories in a family-friendly manner. Having never been fond of the highly glossy studio that had been Mike & Mike’s most recent home, I’m happy to watch Golic & Wingo’s broadcast from a simple, beautiful radio studio and love the trombone earworm that they use. I welcome Mike Jr.’s first hour appearances as I’ve become a fan of his through his increased ESPN presence, including his First & Last program as well as the wacky Weekend Observations. Not just for the fun he brings -- whether egging on his dad into a ridiculous challenge or being egged on into a ridiculous challenge himself -- but I’ve also learned more and find myself caring more about College Football thanks to him.

Throughout today’s show, the hosts rightfully gave kudos to their producer for the musical rejoins. Clearly they connected with the show’s hosts and their guests and aided in overcoming whatever first show jitters may have been at play. Golic & Wingo indicated the team behind the scenes would come into play more as the show progresses and they were excited about various radio bits that were being developed for the new program. So obviously they feel they are a work in progress, “enjoy the transition.”

Part of my morning joy with Mike & Mike was rooted in that same dynamic that grabs viewers attention in TV and movies: the mismatched duo. Like Murtaugh & Riggs, Sam & Diane even Belle & Beast, part of what brought me back each day was the incredibly different perspectives that a rough & tumble football athlete and the well-read, polished journalist/author would bring to sports and general life discussions. Some of my favorite moments and debates are born out of that difference whether it was their continuing debate over the NFL’s perceived protections for the quarterback position with Greenberg positing his wish that the QB could simply be airlifted from the field once the ball was snapped while Golic highlights the physicality of play when he was on the field vs. modern era -or- Golic encouraging soon-to-be dad’s to be actively involved in their child’s birth while Greenberg’s begs new dads to stay as far “north of the equator” as possible. Golic & Greenberg were also at differing points in their married life or raising kids so that also brought differing views.

So while I greatly enjoy the camaraderie between Mike Golic & Trey Wingo, I missed that natural conflict that was presented by the very different natures found in the previous pairing, but I am taking Wingo’s advice to “enjoy the transition.” I’m eager to see how the new team will evolve as Wingo grows into this new role. I anticipate greater exploration of their differences and those natural conflicts as they get more comfortable within the new show. Greenberg used the differences between him and Golic as a way to help break the ice. In recent weeks the Mikes recounted how Greenberg described them as an embodiment of the number ten during their first episode which was in many ways their initial introduction to each other. Its funny to think if that duo were starting today he wouldn’t be able to offer that ice-breaking joke anymore as Golic no longer resembles the number “0” and Greenberg has become a more muscular so not the scrawny “1” he was those decades ago. In this budding partnership, Wingo & Golic have been colleagues and friends for many years. Today’s show reflected what I know of Golic down to the plate of show logo donuts on set but I’m interested to see how Wingo’s influence will appear. I’ve seen Wingo for years and have even chatted with him briefly at ESPN the Weekend and yet I don’t feel like I know him simply due to the dynamics his previous ESPN role. As Wingo grows more confident in the various responsibilities attached to his new role from the live reads to soundboard drops and over the many hours they must fill after today’s introduction, I find myself more excited to get to know him.

You can stream the first episode of Golic & Wingo on ESPN Radio's site. 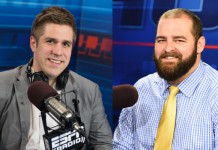 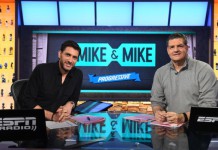