For nearly two decades from just after thanksgiving right up to New Years the World Showcase at Epcot has hosted Holidays Around The World. This one of a kind event features storytellers and other entertainment from each of the countries sharing with guests how they celebrate the holiday times in their homeland.

In the past few years the Holidays Around The World have started to extend into Future World on the Fountain Stage with JOYFUL! A Gospel Celebration of the Season bringing the holiday music alive!

Added this year is the a cappella group the American Music Machine putting their unique twist on some holiday classic. As guest head toward the World Showcase they are greeted by one of the most beautiful of Christmas Trees at Walt Disney World with ornaments from each of the pavilions around the lagoon. Going counterclockwise we start with The Canadian Holiday Voyageurs, this group retiring for its 3rd year, takes guests on a musical tour of Canada. As we venture deeper into the World Showcase, both United Kingdom and France tell the stories of how Santa Claus is seen in those areas of the world. But one of the highlights of all of the Holidays Around The World has to be these small dioramas on display in France, just put up along the pathway deeper into the France pavilion they give us a snap shot of what it must be like there. New this year is the Storyteller in Morocco who talks of "the spice of life" from her country.

In Japan the story of the Daruma doll and the Japanese customs of the New Year are told by one of the most fun storytellers.

The American Adventure has the largest variety of entertainment choices, between the chance to meet Santa and Mrs. Claus, the story of Kwanzaa, Hanukkah, and the Voices of Liberty dressed as Dickens Christmas Carolers you could spend almost the entire afternoon here. Which is to say nothing of the Candlelight Processional...we will get to that later. First we take a look at the story of the Maccabees and how the traditions of Hanukkah came to be.

But no visit would be complete to the American Adventure without seeing the Voices of Liberty.

Join us as we continue our Holidays Around the World on the next page. 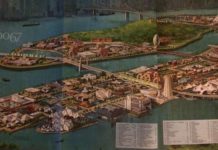 Canada 67: The Disney Film from the Montreal World’s Fair 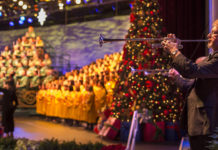 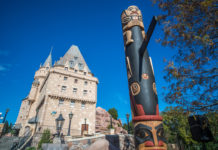