I was ten when Toy Story came out, young enough to still play with toys but not far from entering adolescence. In other words, Toy Story was one of the last hurrahs of my childhood and I am very sentimental towards it (although some may say I never truly grew up). As part of the 20th anniversary celebration, Mattel has released a wave of stylized figures to celebrate Andy's beloved toys.

For review purposes, I was sent a collection called "Andy's Room" that features toys from the first film. Buzz Lightyear, Woody, Ham, Rex and Slinky are all here in this set and are also available separately. But exclusive to this box set is Bo Peep and Etch A Sketch (with a drawing of Buzz). For collectors, the figures are nicely visible in the box and Buzz is standing on a cardboard stack of books. If you want to remove them from the box to put them on display, you'll have to do a little work. The box does not open nicely and is glued together with a strong adhesive that will destroy the packaging. Each figure is secured snugly in a plastic holder, but for added security is also held in place tightly by tiny rubber bands, most of which need to be cut out. They all stand independently except for Woody, which is why they've included a clear plastic base for him with the Toy Story logo on it.

There is little movement to be found in the Andy's Room Gift Set. Buzz and Bo can move their arms. Rex, Slinky, Woody and Bo can turn their heads. Other than that, there's no "action" in these figures. But they are adorable and whether they're for kids or for an adult collector's desk, they're a fun, colorful collection.

The Toy Story 20th Anniversary Gift Sets retail for $24.99. In addition to "Andy's Room," there is a set themed to Toy Story 2 called "Al's Toy Barn" and one for Toy Story 3 called "Sunnyside Daycare." Between the three sets, your favorite Toy Story characters can live forever in your home as compact figures that are easy to collect or display. 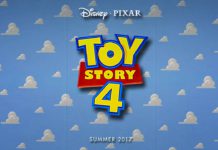