After three successful seasons on Disney Jr., the creative team behind Jake and the Never Land Pirates decided to promote every preschooler’s favorite Never Land inhabitant. Jake and his friends have now joined Captain Hook and Smee, with Jake becoming a Captain. In this sixth DVD collection of episodes from the series, Disney has paired the TV movie that promoted Jake along with the first five episodes of the fourth season.

Join Captain Jake, Izzy, Cubby, and Skully for more Never Land adventures after the film. The rest of the episodes on this disc follow the two-stories-per-episode formula. “Into the Heart of Coldness” finds Captain Jake and his crew leading a rescue mission to save a group of penguins from Shiver Jack. “The Remarkable Beardini” finds Jake helping to take down an evil magician. Things turn supernatural when the Never Land pirates have to try and “Escape from Ghost Island.” Jake’s crew has to help repair Captain Gizmo, a robot pirate, in “The Island of Doctor Undergear.” During a tour of Egypt, Jake uncovers a lost tomb in “Rise of the Pirate Pharoah.” Captain Hook learns what it was like to be King Midas in “The Golden Hook.”

From the main menu, this disc contains four episodes, including the special episode. But housed under Bonus Features are two more episodes. The difference is almost indistinguishable when you use Fast Play. After as it just continues playing into the bonus episodes.

The plain white disc is housed in a standard-sized black DVD case, which includes a shimmery embossed slipcover. Inserts include a Disney Movie Rewards code (75 points), an ad for Disney Movie Club, and a cardboard cutout puzzle of Captain Jake’s pirate ship Colossus. With 15 pieces and visual instructions with no words, it requires an adult to assemble. The pieces tear and bend easily and once assembled it comes apart quickly, but it is a nice physical bonus.

This disc uses Disney’s Fast Play, which means parents can start the disc and walk away without waiting for a menu to load. Allowing it to run its course plays a trailer for Zootopia. After the main feature and bonus episodes, it plays ads for Disney Movie Rewards and Disneynature Born in China.

Any parent with kids who love Jake and the Never Land Pirates would be happy with this release. It offers over two-hours of content with the easy to use Fast Play feature. The cardboard pirate ship is a nice physical bonus, but it won’t last long in play due to its delicate structure. The addition of celebrity voices and a triple-length special episode make Captain Jake and the Never Land Pirates: The Never Sea Conquest a wise choice. 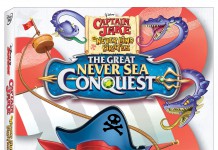 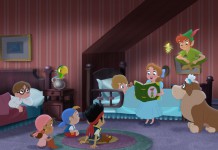 “Jake and the Never Land Pirates: Battle for the Book” DVD Review 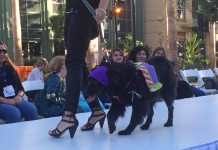