Mark Sumner who was Mechanical Engineer, Ride Systems for Soarin' Over California and Grizzly River Run. Sumner has tackled difficult mechanical problems for everything from The Twilight Zone Tower of Terror to Splash Mountain to Maelstrom to the world's largest telescope and observatory atop Hawaii's 14,000-foot volcano, Mona Kea.

LaughingPlace.com: What were your contributions to this park?

Mark Sumner: I’m the technical director of ride engineering and I was involved with the Soarin' attraction and Grizzly River Run, as far as the ride systems.

LP: Can you tell me what is unique about Grizzly Run as opposed to traditional or any other raft ride?

MS: There are actually two things I would say are different, maybe three things as far as a white water rafting ride. We bill this as the tallest, the longest and the fastest, which it is. It’s unique that we have down ramps. The only other one like it is in our Disney park in Florida and in fact some of that technology was developed at the same time. We actually built a full scale down ramp in our facilities up in Tujunga and tested for about five months how a river raft acts on a down ramp because no one had done that before. We didn’t know whether it was hard to slow down, whether it would hydroplane. With something like Splash Mountain we have the ability to reconfigure the holes to help contain some of the splashing, help it slow down. We didn’t have that opportunity with the round river tube. So the down ramps are unique to it.

The other thing that is unique is usually when we design a water ride what we like to do is put them on the edge of the park. That’s because we have big noisy pumps. We like to have a reservoir that usually is out of sight. We didn’t have that luxury here because the bear ride is right in the middle of the park. So we made our pumps totally submersible so they’re about 12 to 15 feet under water right in the middle of the park where they don’t make so much noise. The other problem we had was where to put a reservoir. There wasn’t lots of space available. We looked over to Paradise Pier and saw a big lagoon that was very tantalizing so what we ended up doing is taking a portion of the that. There is actually a wall underneath the Paradise Pier bridge and one-half of that Pacific Wharf is actually the reservoir for the raft ride. The only problem is it is 300-feet away from the raft ride. So we ended up building an underground water tunnel that people won’t see that’s about 14 feet wide and 8 feet tall, you can drive a couple of pickup trucks through it. And the challenge for our creative folks then was when we start the raft ride up and start filling up the mountain with water, the water in the reservoir drops about 2-1/2 feet. So they were scratching their heads and said what do we do. Then they had the idea to treat it like a tidal basin. There’s a bunch of rocks in there, it looks like a tidal basin and what happens in the morning is the tide goes out as we turn the ride on and then in the evening, when we turn the ride off, the tide comes back in. So if you’re ever out there having lunch and the tide is coming in you’ll know there’s a problem and the raft ride is shut down.

LP: This was one of the first times a raft goes down a drop. Can you talk about that?

MS: It was a little bit surprising simply because we didn’t know how they would act and what we found out is they actually slow down probably a lot faster than say a log ride like Splash Mountain. We spent a lot of time developing what the water depth should be and what the profiles for the rail should be, so we learned a lot. Funny story - we did this for this ride and the team that was developing the one in Animal Kingdom had decided they were going to do that and when they saw what we were learning they ended up taking over our test facility and doing testing and making some changes to their ride. Doing the early testing made a big difference and when they put their ride in it worked right off the bat and the same thing here. We made very, very minor changes in doing the test and adjust on them because of all the knowledge that we gained a year and a half ago was very beneficial.

LP: Was the spin a challenge?

MS: It was. There’s a good story behind that too. Originally our idea was to do a spiral down ramp and we were thinking about doing a 360 degree spiral. When we built our test facility what we found out is that it just had more friction than we expected and that we couldn’t get - with the height that we had available - we couldn’t get 360 degrees, we only could do about 180. Everybody kind of said "that doesn’t seem very fun, what else can we do?" So when we had this test facility, we thought "I wonder what it would feel like to spin going down a straight down ramp?" So in the early test I’d stand up there and hold the edge of the raft and we would cut the rope that would let it go and we would give it a little spin. People said "hey, that’s really a lot of fun. How can we appropriate that?" So we spent some more time on this test facility and figured out on how to make the ramp spin going down. It’s a subtle thing but it makes a big difference. It catches people by surprise. They’re not expecting it.

LaughingPlace.com: Soarin' Over California is an amazing attraction. Did you come up with the concept for the way the ride vehicles would behave?

Mark Sumner: Yeah. This is sort of a high tech, low tech story. On the high tech end, the first thing we needed to do was find out where the people should be up inside the dome. So we used the Imagineering Research and Development lab to build a virtual reality dome for us where we could put on a set of headsets and we could actually sit in different seats and put them in different places. We could watch a little movie and you could look around and see the different seats. Once we decided where the people needed to be we had to figure out how to get them there. How to fly them up into this 80 foot diameter dome. Most of the early concepts involved multiple floors of a building and we were going to fly them out on a dry cleaner rack or a hydraulic boom or something - just shoot them straight out. But it became too complicated to get people up and down on different levels because now you have to have all kinds of escalators and you have to have elevators. You have to have operators on all the floors and so we said, you know, the only way this is really going to work efficiently is if we can load everybody on one level. We didn’t know how to do that.

It was shortly before Thanksgiving holiday in 1996 and we said let’s go on holiday and when we come back we’ll tackle this problem. Most Imagineers, they don’t leave their work in the office, and I got to thinking a little bit about it. I sketched up a mechanism and thought this might work but it’s going to be really difficult to explain how this works on paper. So I got out my 50s era erector set, and I built a working model where you can turn a little crank and three little seats go up in the air and I brought that in a grocery sack to the next meeting and everybody said we’ve got to tackle this problem and I said how about doing something like this and I put it on the table and cranked it up and everybody said, gee can you do that full size? I said, I don’t know, give me a little time and I’ll do some engineering on it and that sort of kicked it off. The mechanism that’s out there is exactly like the model I built. We get from the high tech, the latest virtual reality technology, to the low tech which is 1950s kid’s toy.

LP: Is the mechanism that’s there really unique in the theme park industry?

MS: It is. There’s nothing like it. From the ground up the whole attraction was meant to be unique. The basic idea is we want people to get the experience of hang gliding. That was probably the one attraction in the park that was the least defined about how we were going to do it when we started out. We knew what we wanted to achieve but we really didn’t have a good idea of how we were going to do that. As we worked along through the process we ended up with the ride system you see today, the great 48 frame per second IMAX film which is crystal clear, good audio system and the special effects, the wind and the scents.

LP: The thing that I really love about it is that it’s not a thrill ride. It’s a ride the whole family can enjoy. Was that the design from the beginning? 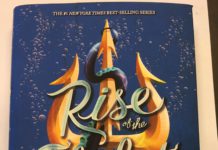 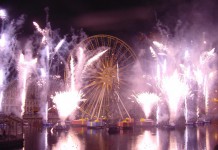 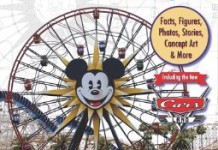 Book Review: Get a Closer Look at DCA with the Imagineering Field Guide to Disney California Adventure