In anticipation of the release of Walt Disney Animation Studio's 55th animated film, Zootopia, the El Capitan decided to have a marathon of every animated Disney film released from the John Lasseter-era ahead of Zootopia's March 4th release date. After showing Wreck-It-Ralph, Frozen, Tangled and Big Hero 6, day five consisted of the first film released chronologically: Bolt. (Were I running the event, I would've included the underrated Meet The Robinsons in the marathon as it was the first animated Disney film released after the Pixar purchase and the first to be produced by Lasseter, but I digress).

Bolt was introduced by its co-director, Chris Williams. Just like the previous screenings, if you were among the first 75 guests to enter the theatre, you got a chance to meet him and have a complimentary lithograph given by the El Capitan autographed by him. While El Capitan is known for getting celebrity guests to introduce films before the screening, this marathon is the first time they've offered an autograph session with the guests before the show. This was a stroke of genius on the El Capitan's part and one I hope is offered more in the future as I picked up many of the guests were excited have a personal interaction to take home with them. After the autograph session, the theatre eventually opened its doors where organist Rob Richards was playing the Disney song-list on the organ while audiences took their seats.

Chris Williams then came to the stage and welcomed us. He then went on to explain that working at Disney has been his dream job and that he got to work on some incredible films. But there was a point in time when Disney animation was struggling, releasing films that weren't very successful and when Disney was in an identity crisis. At the same time, he said, Pixar was making amazing films and that it was the current studio many employees at Disney strived to be. That made many people at the studio wonder, "Who is going to be our John Lasseter?" Then, one day, the animators of Disney gathered for a huge announcement; that announcement being Disney had bought Pixar and that John Lasseter would be Chief Creative Officer of Disney Animation Studios, making all the animators realize, in Williams' words, "John Lasseter would be our John Lasseter." Chris Williams said this made him excited as it would offer "a chance for a new beginning and a fresh start" and that's when work for Bolt started.

What he failed to do was expand on the fascinating history that led to Bolt; that it started as an original idea to called "American Dog" by Chris Sanders (the man who came up with Lilo and Stitch). It was to follow a star of a popular crime show, a dog named Henry, who would one day wake up 2,000 miles from home in a Nevada desert and that he would have to rely on then help of a one-eyed cat and a radioactive rabbit to get home. (Concept Art and an animation test roam on the internet if one is curious). Lasseter was apparently not a big fan of Lilo and Stitch and he felt the story on "American Dog" needed work, saying it felt "too bold" and "too quirky." Ultimately, it ended up with Chris Sanders leaving Disney, despite having directed the one big hit from Disney Animation of the 2000s, and Lasseter hiring Chris Williams and Bryon Howard to completely retool the film into ultimately the one that exists today. Given the tensions and conflict with that truth, it makes sense Disney would want to avoid bringing that up, still I would've been very happy if at the very least Sanders got a name-drop from Williams. After all, the history and tension of the production history of Bolt is a lot more fascinating than the movie itself (more on a little later).

Williams' little introduction was followed by a brief Q&A that consisted of "If Walt Disney came back to life and you could show him one Disney movie since his passing, what would it be?"(Williams' answer: "Toy Story as it would be cool to show Walt John Lasseter's important groundbreaking film") and "Will there ever be a sequel to Bolt?"(Answer: "Never say never, but currently nothing is planned"). Some prizes were raffled, including a Zootopia swag bag, as well as a lot of autographed Bolt stuff such as a poster, Blu-Ray and animation sketch art. This was the followed by an introduction by John Lasseter a trailer for Zootopia, the followed by our feature presentation. When I first saw Bolt in theaters in 2008, I honestly didn't like it. In fact, I rather hated it. A big part of that was knowing the behind-the-scenes conflicts and being bitter that Sanders got booted from his own idea. Really though, nothing of the film impressed me. I hated that Bolt (the character) and how he believes the TV show is real was essentially a rip-off of Buzz Lightyear and the dilemma of how he thought he was a real space ranger. I hated the bland character designs in comparison to the creative designs of Sanders' concept art, I hated the jokes, I hated the emotional scenes and the fact that Miley Cyrus (still part of Disney during the big Hannah Montana phase) was shoehorned in the film to give this film "celebrity status" in the marketing was merely adding insult to injury.

Despite my reservations on the film, I was curious about seeing the film again, having not seen it since theaters and avoiding it on home video and television. I wondered if it was really as bad as I remembered it being eight years ago, especially now Disney considers the film part of the "modern Renaissance" their animation department is experiencing.

So was better than I remembered? ...a little. I'll admit though that while Bolt is similar to Buzz Lightyear as a character, the story isn't similar to Toy Story enough to be too distracting. The film is definitely watchable from beginning to end. Miley Cyrus' voice wasn't as much of an abomination as I remembered (though I still feel she's rather miscast as the voice of young Penny). Also helping ease the pain tremendously was the knowledge that the team who brought us Bolt, including director Williams, have gone on to make far better movies like Tangled and Big Hero 6. Even Chris Sanders, who left Disney on disappointing terms following "American Dog", has moved on to have a successful career at DreamWorks, directing their most beloved movie, How To Train Your Dragon. I still maintain my belief, however, that, of the seven film showed at this marathon, Bolt is by far the weakest. While there are chuckles, the film is just not particularly laugh out loud funny ever and the tear-inducing moments feel manipulative rather than genuine. The characters, most importantly though, are overall lacking in the Disney canon and are not particularly distinctive (I'll note that I also see a lot more Stitch plushies being sold than I do Bolt ones). With eight years having passed since its release date, I think it's safe to say this film's legacy is comparable to something like The Aristocats or Oliver and Company as an OK movie that merely falls short when compared to the more beloved and classic installments of the Disney canon.

And yes, a part of me would still love to be able to have seen what Sanders' "American Dog" would've looked like. But to paraphrase a Disney princess of this modern renaissance, it's probably just best at this point to let it go. 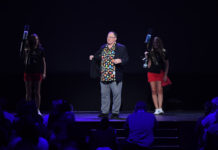