In the same year that Disney’s live action remake of The Jungle Book beat both Batman and Superman at the box office, the studio produced a quieter remake that returned softer results. Based on the 1977 live action/animation musical classic, Pete’s Dragon has surprisingly little in common with the original. In fact, Disney shied away from the term “remake” and instead used “reimagined.”

When forest ranger Grace finds a lost boy in the woods, she forces him to come home and ignores the story of his dragon. But when woodcutters stumble upon Elliott’s home, the dragon is in danger and only Pete and Grace can save him. Join them on a heroic adventure to set Pete’s dragon free in this live action non-musical family film.

Starring Bryce Dallas Howard as Grace and Robert Redford as her dragon-loving father, this version of Pete’s Dragon strives for as much realism as possible whereas the original established itself as a candy-colored fairytale. It’s not quite a period piece either, although it takes place pre-cellphone with 70’s/80’s clothing and timeless folk music rounding out the soundtrack. If it weren’t for the pristine picture and modern visual effects, you would almost think this version is as old as the original.

The ultimate question every Disney fan will ask is which version is better? I grew up on the “Brazzle Dazzle Day” original and may be unfairly looking at it through candy colored glasses. However, this retelling is a beautiful film that strikes its emotional chords in different ways. Open minded viewers will discover that there’s lots to love in this version, even if you might not love it as much as the original.

Arriving on Blu-Ray and DVD, just in time for the holidays, Pete’s Dragon is available in a few different ways. This review covers the Blu-Ray/DVD/Digital HD combo pack and all of the contents included. There is a standalone DVD release as well, but the combo pack offers the most bang for your buck.

The wide theatrical aspect ratio of 2.39:1 is replicated on this release. The Blu-Ray offers a pristine experience with high levels of detail. Ever strand of Elliottt’s fur is visible, with every leaf and pine needle on every tree. It’s a stunning transfer that will please every fan.

Because the film’s color palette is so soft, the DVD loses detail but colors seem nearly identical since this spectrum is what DVD is best capable of.

The default track on Blu-Ray is a 7.1 DTS-HDMA mix. It’s an absorbing mix that utilizes the full sound spectrum well and gives every speaker a moment to shine. Other audio options include a stereo descriptive audio track as well as French and Spanish 5.1. The DVD features the same options, but the 7.1 English mix has been reduced to a 5.1 standard definition track.

The only bonus feature on the DVD is Making Magic.

Pete’s Dragon is housed in a standard sized Blu-Ray case with disc holders on the inside covers. Both discs are artless with two inserts, one for your Disney Movies Anywhere digital copy, the other an ad for Disney Movie Club. An embossed slipcover comes in the first pressing with a holiday “To/From” sticker affixed to further emphasize the fact that this makes a great gift.

Both discs open with one ad for Beauty and the Beast. Selecting “Sneak Peeks” from the menu plays additional ads for Disney Movie Rewards, Disney Wildlife Conservation Fund, Disney Vacations, and Elena of Avalor.

Disney’s 2016 version of Pete’s Dragon arrives on Blu-Ray and DVD with excellent picture and audio quality. A handful of bonus features shed some insight into the behind the scenes process, although all of them feel light including the commentary. And while this isn’t the “Brazzle Dazzle Day” musical you remember, open-minded fans will find a sweet and touching film. 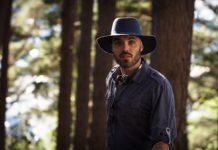