In-Depth with Star Tours: The Adventures Continue
Page 1 of 4

by Doobie Moseley
May 20, 2011
Doobie details the queue and the ride for Star Tours: The Adventures Continue and give his opinions on the ride and the variations.
LaughingPlace.com recommends MouseEarVacations.com - the Official Travel Agency of LaughingPlace.com - for all your Disney travel needs. 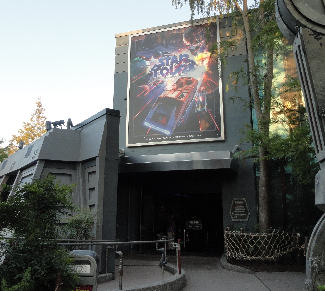 I wasn't there when Star Tours opened at Disneyland in 1987, but I've heard stories. Launched with a 60-hour party (they don't do those anymore!) and a line out to Main Street it was an entirely new type or ride experience and an instant hit. And the best part? Since it's "just" a film, it could be updated with new experiences every few years so it would always stay fresh.

The best laid plans ... as the years rolled on without a change and as simulators moved into other theme parks, Las Vegas, malls and even McDonalds, the novelty wore off and the ride, while still enjoyable, certainly showed its age. So when Disney announced they would finally be creating Star Tours 2, I don't know anyone who thought it was a bad idea.

Tonight, at a media party, I had my first opportunity to try Star Tours 2 Star Tours: The Adventures Continue for myself at Disney's Hollywood Studios. The new version features a 3D film (with cool black glasses) and more than 50 variations in the experience so you never know where you'll go and what characters you'll see. A great idea that obviously makes for a lot of repeatability. So what's it like???


Warning...
There are spoilers below so stop right here if you don't want to read them. 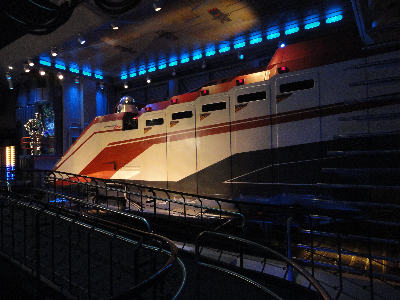 The experience begins with a queue that bears a lot of similarity to the former queue but with lots of updates as well. The departures board shows various destinations along with the expected weather in English and a galactic dialect. The white StarSpeeder 3000 has been replaced with a red StarSpeeder 1000 with R2-D2 aboard and C-3PO near by. Admiral Ackbar still watches things from above and the layout seems to be unchanged. Captain Rex in Need of Repair

In the second room are even more changes. On your immediate left is Rex, your pilot from Star Tours, marked defective in Droid Customs saying random bits of his Star Tours dialog. Elsewhere a droid is x-raying baggage, but unfortunately the screen here wasn't working for us. I hear, when it is, the results are very funny. Lastly, there is a body scan where guests on one side can see the scans of those who walk through on the other side. The effect reminds me of the the one at the start of Tower of Terror in California.

Finally, you're at the "how many in your party" area where you're assigned to one of the six StarSpeeders and put in a row. The new pre-show video is quite clever and funny. It also sets up the story of the missing captain if you're paying attention, but if you miss it - don't worry, you won't be lost. The safety portion of the video is completely redone (no more crazy hair lady Jenifer Lewis) but there are still Star Wars characters in the cabin and some very cute touches. 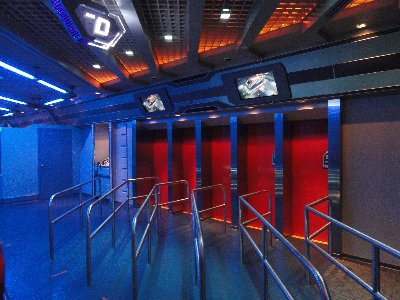