All three series will present fans with the opportunity to see exclusive footage from the upcoming season, as well as experience a Q&A with the series’ casts and creators. The ABC Family booth will feature talent appearances, giveaways, and other activities and activations. Talent scheduled to appear include the full cast of “Stitchers” and “Shadowhunters” and all five “Pretty Little Liars.”

Highly intelligent and emotionally distant, Kirsten Clark has an aptitude for technology but never expected that she’d be hacking into the minds of the recently deceased in ABC Family’s hit series “Stitchers.” Recruited into a covert government agency to be ‘stitched’ into the memories of the dead, Kirsten is the perfect candidate to investigate murders and decipher mysteries that otherwise would have gone to the grave. Working alongside Kirsten is Cameron, a brilliant neuroscientist whose passion for the program is evident in his work, and Linus, a socially immature bioelectrical engineer and communications technician. The secret agency is headed by Maggie, a skilled veteran of covert operations who closely guards the deeper purpose of the Stitchers program. Kirsten’s roommate, Camille, a gifted computer science grad student, is also recruited to use her skills to assist Kirsten in her new role as a ‘stitcher,’ as well as LAPD Detective Fisher, who provides back-up and support for the team. “Stitchers” will air a stand-alone Halloween-themed episode in October 2015 and will return with all new episodes in 2016.

Now in its sixth season, ABC Family’s #1 hit original series “Pretty Little Liars” has become a social-media phenomenon. The series follows the twists and turns of four friends – Aria, Emily, Hanna and Spencer – who were tormented by an unknown assailant who only goes by “A.” After years of mystery, murder and mayhem, the Liars finally came face-to-face with “A” during the summer season finale. When “Pretty Little Liars” returns in early 2016, the PLLs are five years older and forced to return to Rosewood and deal with a new mystery. Exclusive footage of the five-year time jump will be shown as well as executive producers and cast tease what is to come for Aria, Emily, Hanna, Spencer and Alison.

The panel will include exclusive footage and a Q&A with cast members Troian Bellisario (“Spencer”), Ashley Benson (“Hanna”), Lucy Hale (“Aria”), Shay Mitchell (“Emily”), Sasha Pieterse (“Alison”), and Executive Producers I. Marlene King, Oliver Goldstick and Joseph Dougherty and will give fans a look at the flash forward and what new mystery lays in store for fans and the Pretty Little Liars.

The new ABC Family television series “Shadowhunters,” based on the New York Times bestselling young adult fantasy book series The Mortal Instruments by Cassandra Clare, follows 18-year-old Clary Fray, who finds out on her birthday that she is not who she thinks she is but rather comes from a long line of Shadowhunters – human-angel hybrids who hunt down demons. When her mother, Jocelyn, is kidnapped, Clary is thrown into the world of demon hunting with mysterious Shadowhunter Jace and her best friend, Simon. Now living among faeries, warlocks, vampires and werewolves, Clary begins a journey of self-discovery as she learns more about her past and what her future may hold. “Shadowhunters” is set to premiere in early 2016. 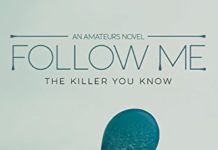 Book Review: “Follow Me – An Amateurs Novel” by Sara Shepard (from Freeform Press)