In the second video from Oh My Disney's “Disney In Real Life” series, Tim Burton’s Alice Through the Looking Glass gets revamped with kittens -- all of which are available for adoption. You can watch feline versions of Alice, The White Queen, The Mad Hatter, and more make their feline debut act their parts from the film

For this episode, Oh My Disney tapped Paws for Effect, an animal talent agency that books animals for popular films, along with providing adoption services for the animals. Five cats from the agency were recruited for this video, where they recreate the infamous tea party scene from Alice.

This commemorates the release of Alice Through the Looking Glass on Blue-Ray and Digital HD worldwide, next Tuesday, October 18. 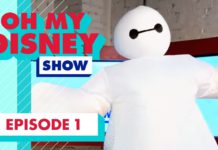