As we reported, over the weekend President Trump's White House screened Disney-Pixar's Finding Dory for staffers and their families. Incidentally, that screening followed a controversial executive order signed by the President on Friday that disallowed travel for citizens of seven countries while also putting a freeze on the refugees immigrating to the United States. In response to these two seemingly unrelated events, Ellen DeGeneres, who voices the title character in Finding Dory, took a moment on her show not to directly share her political stance on the order but to give new perspective on her film as she sees it:

Earlier in the weekend, DeGeneres also spoke about the executive order in a couple of tweets:

For me, America is great because of all the people who came here. Not in spite of them. #NoBan

P.S. My grandparents were immigrants. The woman making us pizza right now is Muslim. And I'm grateful for all of them. #NoBan

Finding Dory is, of course, the sequel to beloved hit Finding Nemo. The film was a massive success when it opened last summer, closing its box office run with over $1 billion internationally. 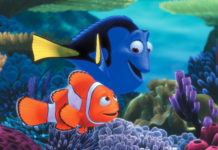