Today a broken Buzz Lightyear toy found at an office near Hong Kong Disneyland park caused the evacuation of 500 workers and brought anti-terrorism officers to the resort. According to the South China Morning Post, authorities were called around 12:30 p.m. Monday after a parcel was discovered containing wires and a battery. Bomb disposal experts turned up some time later, with a source adding, "The theme park’s two sniffer dogs were also deployed to detect any dangerous goods and gave a positive indication to their handlers.”

The parcel in question turned out to be a toy featuring Buzz Lightyear along with a letter from a parent claiming they had purchased the toy only to discover it was defective. Workers were able to re-enter the building around 4 p.m. 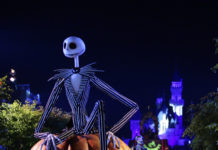