Back in 2015, ahead of the highly anticipated arrival of The Force Awakens, several retailers participated in an event dubbed Force Friday, which saw a multitude of Star Wars toys and merch pouring into stores. With Star Wars Episode VIII — AKA The Last Jedi — set for this December, Disney is now announcing that Force Friday II will take place on September 1st, 2017.

“The first Star Wars Force Friday event was truly unique, uniting fans across five continents in an unprecedented global live unboxing event ahead of thousands of midnight openings at retail,” says Jimmy Pitaro, Chairman, Disney Consumer Products and Interactive Media. “We’re excited to confirm that Star Wars Force Friday is back for The Last Jedi. Plans for this year’s worldwide event are top secret but expect something befitting the excitement around the next episode of the Star Wars saga.” Additionally, Samantha Lomow, SVP at Hasbro said, “Toys play a unique role in the Star Wars universe, and we’re proud to have been part of that incredible legacy for the past forty years. The new line for The Last Jedi is our most innovative yet, and we’re excited to unveil it on Force Friday II.”

While this year's exact product lineup is still under wraps, the company did give us a preview of one package featuring our first look at Rey, Finn, and Poe in The Last Jedi:

Stay tuned for more Force Friday II news in the coming months and get exciting for The Last Jedi — hitting theatres December 15th, 2017. 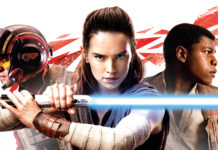 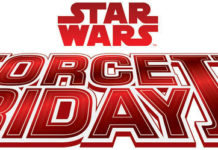