In celebration of Aladdin’s 25th anniversary over the weekend, Oh My Disney released a special episode of “Watch A Disney Movie With.. Jafar,” in which Jonathan Freeman, the voice actor who played Jafar, reveals that Robin Williams’ Genie was supposed to be green, that Gilbert Godfried’s parrot Iago had a much smaller part in the original iteration of the iconic duo, and other secrets from the sound booth.

Join the quick-witted Broadway star backstage in New York City, as he unwinds common misconceptions, drastic changes and character edits from the film that changed the landscape of motion picture animation forever, including: 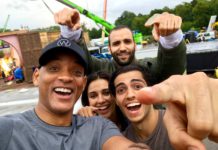