The lineup of shorts and features set for the next installment of TCM's Treasures from the Disney Vault has been released. The lineup is set to begin March 29, 2018 at 8pm ET.
Here is what Disney fans can expect:
Golden Touch, The (1935)
Sword and the Rose, The (1953)
In Search of the Castaways (1962)
Mickey's Trailer (1938)
Mr. Duck Steps Out (1940)
One and Only, Genuine, Original Family Band, The (1968)
Journey of Natty Gann, The (1985)
Rob Roy, the Highland Rogue (1954)
Look for more details, including a full preview of each short and film, on LaughingPlace.com prior to the event.
Treasures from the Disney Vault is TCM's quarterly block of Disney programming that features a dynamic array of content from throughout Disney history. 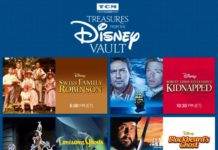