The El Capitan Theatre will be presenting Snow White and the Seven Dwarfs to celebrate the film’s 80th Anniversary from February 2 to 7, 2018.  Snow White herself will make a live appearance on stage before every show.  Legendary Disney Producer Don Hahn (“Beauty and the Beast,” “The Lion King”) will be in person at The El Capitan Theatre on Saturday, February 3 to introduce the film at 1:00 PM and 4:00 PM.

Also -- Disney also teamed up with legendary designers—Alberta Ferretti, Naeem Khan, Monique Lhuillier, Alice + Olivia, and Marchesa – who created one-of-a-kind fairytale gowns that will be displayed during this exclusive engagement of Snow White.  These creations, originally displayed over the recent holidays in the Saks Fifth Avenue New York’s 49th Street and 50th street windows, will be seen in the lower and street level lobbies of The El Capitan Theatre.

Collins continued, “And it is a rare occasion that we get to see this film on the big screen, as it was meant to be seen.  And in a special arrangement we will be displaying five high fashion gowns inspired by the romance of the story from the New York Saks Fifth Avenue.  In every way, ‘Snow White’ is still the fairest of them all!”

Among the accolades, the Library of Congress in 1989 deemed the film "culturally, historically, or aesthetically significant" and selected it for preservation in the National Film Registry.  “Snow White” is also ranked in the American Film Institute's list of the 100 greatest American films, who also named the film as the Greatest American Animated Film of All Time in 2008.

Walt Disney himself said, “I just thought it was a perfect story … ’Snow White’ started a whole new era.”

Leonard Maltin said, “’Snow White and the Seven Dwarfs’ remains a joyful experience even after 80 years. It paved the way for every Disney classic to follow, right to the present day.”

Animation historian Charles Solomon said, “The principals of animation that go into character animation – the art of making the character move in a way that demonstrates his personality so that you understand who he is even when he is not speaking … is a uniquely American art form that was largely invented at the Disney studio.  We still have animated features as musicals because ‘Snow White’ was a musical.  The idea that they should be based on fairy tales comes from ‘Snow White.’  The kind of story telling in ‘Snow White’ is still the same kind of story telling that animators aspire to in their films.  It is one of the real watersheds in the history of the medium of animation.” 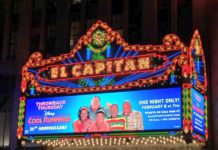