A few months ago, rumors from Japanese media indicated that Oriental Land Company was looking to expand the Tokyo Disney Resort beyond the current additions and upgrades in progress. The plans detailed at that time called for a parking structure to replace the current parking lot, making room to increase the resort by one-third. This past weekend, Japan's Mainichi Shimbun reported that this expansion would indeed take the form of a third gate with an interesting theme. This third gate is expected to continue to resort's naming scheme, with the new park going by the name Tokyo DisneySky. While some of the details such as the location and possible announcement timing match with the initial set of reports, there are many significant differences. First, while rumors indicated that construction on any announced expansion wouldn't begin until 2025. However, that timeline moves way up in Mainichi Shimbun's report, with work starting in FY 2019 and the park opening as early as FY 2022. The other major difference between initial reports and this one is the theme of the park. As mentioned, this latest report indicates a sky and space theme while previous reports suggested a Japan theme for the park. Also of note, Mainichi Shimbun's report says the potential park would feature some upgraded tech and conveniences including moving walkways.

In response to the report (as TDR Explorer shares), Oriental Land Company released a statement clarifying that they have not announced any plans for a third park at the resort. If Mainichi Shimbun's report proves accurate, an official announcement of the expansion could come in April or May of this year. 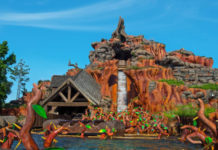